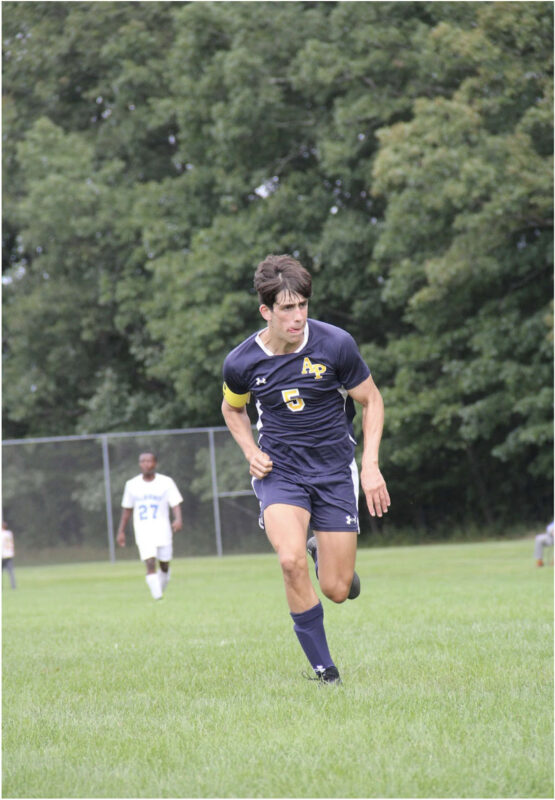 This week’s Scholar Athlete of the Week is Gregory Effman. Greg is a captain on the Varsity soccer team, where he plays as a center back. Greg also plays tennis in the spring; last year he competed at the fourth singles spot in the ladder. Greg began playing soccer twelve years ago when his brother signed up to play the sport. Greg wanted to play with his brother, and soon fell in love with soccer. To prepare for his season, Greg runs and lifts a lot over the preseason. Greg also watches professional soccer to learn how to better play the game. Greg’s favorite part about his sport is the physicality of it. Specifically, Greg enjoys, “being forced to win 50/50 balls in tense moments that can make or break a game.” For Greg, the most difficult part about soccer is needing to make quick decisions. Greg noted that before the ball even reaches his feet he needs a plan of what to do with it. In his sophomore year, the soccer team struggled to win a single game. However, last year they managed to turn the season around and earned a win in the sectional championships. This dramatic reversal helped bolster team spirit, and was a huge accomplishment. As he entered high school, the soccer team had not won a single sectional game since 2013. This year, Greg hoped to make the soccer team memorable in his senior year. In the team’s sectional semi-final game against Queensbury this year, the game went to penalty kicks after neither team scored with two periods of overtime. Greg scored the team’s first penalty, and they won 4-3. Greg is particularly proud of this moment because he

managed to score despite the high tension and stress. Between winning sectionals last year and making it to the finals again this year, Greg is proud to say he feels that he has accomplished his goal.

In addition to his athletic success, Greg excels academically. Greg has a 93 GPA while taking rigorous courses including Advanced Placement Government and Politics, AP Statistics, and AP Physics. Greg is also a member of the robotics club and the National Honor Society.

Greg also strives to get to the gym and lift every day. To balance school and sports, Greg sets a strict schedule and forces himself to stay with it. This year, Greg wakes up at 3:30 every day to go to the gym before school, and gets to school by 7 a.m. for robotics. In his window of time before practice, Greg completes his homework after school. After practice Greg then eats dinner and goes to bed by 8 p.m. This time management allows Greg to stay on top of his work and continue doing his best.

Greg’s brother Zach serves as his role model. Zach got Greg interested in soccer and helped teach Greg to love the sport. Zach is also a great student and pushes Greg to work hard. Greg also noted that his teammates play a large role in his success. Greg commented that his teammates help push him and give him advice to improve his skill. Greg would advise a younger athlete interested in soccer to, “stick with it. It’s a great community to be in with lots of amazing people. If you put the work in you truly can succeed.” Next year, Greg hopes to go to college to become an engineer. He will also try to play on an intramural team while at college.

We wish Greg the best as he finishes his senior year and prepares for college.