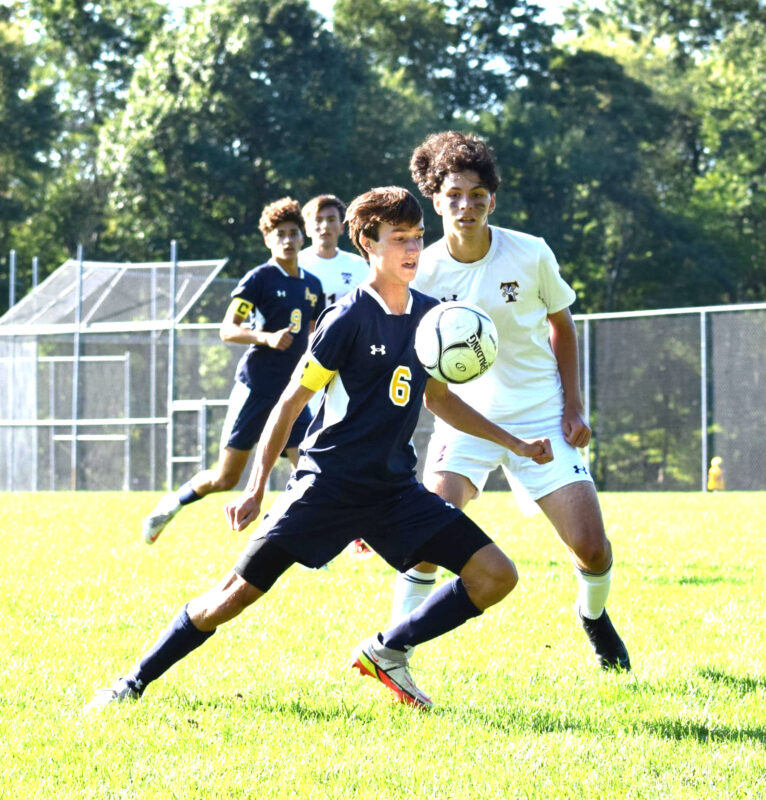 This week’s Scholar Athlete of the Week is Hayden Kiehl. Hayden participates in both indoor and outdoor track, where his favorite events include triple jump, long jump, and high jump. Hayden is also a captain on the Varsity soccer team, where he plays as a midfielder and winger. Hayden began playing soccer when he was four years old, and started his track career when he joined the modified team in seventh grade after seeing his sister participate in Varsity track. To prepare for his soccer season, Hayden works hard during track to keep in shape. Hayden also plays on a travel soccer team outside of his school season to maintain his skills. Hayden’s favorite part about soccer is having fun as a team. Hayden also noted that during the track season he enjoys the rush he gets from his jumping events. For Hayden, the most difficult part about track is the anticipation before a race begins. Lining up during a meet can be nerve wracking, but it is important for Hayden to keep a steady mental state before his events and keep calm. During the fall of Hayden’s junior year, the soccer team faced a challenge as their coach changed in the middle of the season. However, Hayden helped his team overcome this difficulty and led them to a sectional championships victory. “We just stuck with each other and our coach reminded us that it’s not the coaches that make the team, it’s the players.” This year Hayden scored the final penalty kick needed to secure a win against Queensbury in the sectional quarter finals, bringing his team to second place in the championships. Hayden now hopes to reach 40’ in triple jump, 20’ in long jump, and 6’ in the high jump.

In addition to his athletic success, Hayden excels academically. Hayden has a 4.0 GPA while taking a difficult course load, including Advanced Placement Statistics, AP Physics, and AP Government and Politics. Hayden is also a member of the National Honor Society. In his free time, Hayden enjoys playing piano, drawing, and playing games with his friends. To balance school and sports, Hayden tries to get his schoolwork done before practice every day. Hayden also keeps on top of his work by completing it the day it is assigned, ensuring he does not fall behind in his academics.

Hayden’s parents serve as his role models by helping keep him on track with all of his schoolwork. Hayden’s teammates help push him throughout his sports, and help Hayden have fun with his athletic career. Hayden would advise a younger athlete to keep in mind that, “Practice really does help a lot, so even if you are stuck on something keep trying.” Next year, Hayden plans to study science in college. Hayden also hopes to continue playing soccer at the collegiate level. We wish Hayden the best as he finishes his senior year and prepares for college.