The girls lacrosse team advanced to the Class C finals, beating South Glens Falls on 6/11 with a final score of 12-7. Seniors Julia Foster and Julia Gelder each had three goals in the win while Lilly Vanderkar, Gianna Geraci, and Mia Tessitore all added two goals each. Ellie Garrison had nine saves in goal.

The baseball team defeated Mohonasen 9-6 in the first round of sectionals on 6/9. Aidan Mccue earned the win on the mound for the boys. The baseball team fell 3-0 on 6/10 to South Glens Falls in the quarter finals. Congrats to the baseball team on an outstanding season!

I will be back next week for the final week of AP sports this school year. Go Warriors! 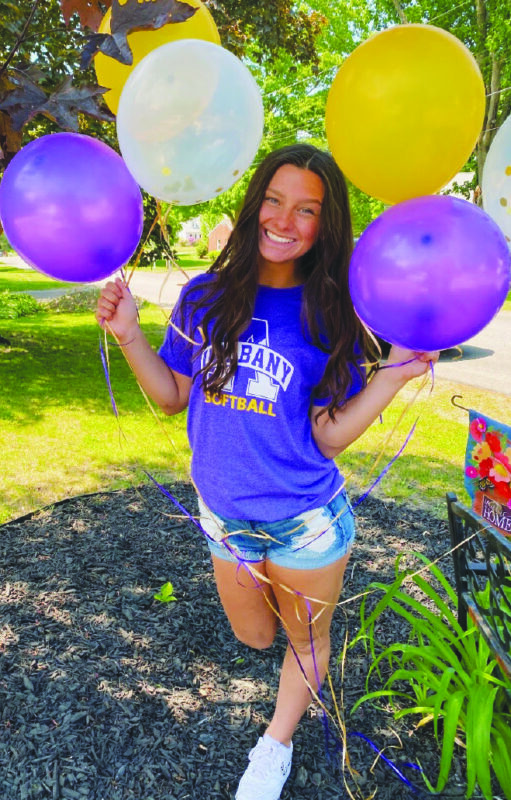 AVERILL PARK – This week’s Scholar Athlete is McKenzie Swinson. McKenzie plays center field for the Varsity softball team. McKenzie first played softball at Classie Lassies when she was four years old. Since discovering her love for the sport, McKenzie has played softball for 15 years. To prepare for her school season, McKenzie plays with the Empire State Huskies. McKenzie also spends a lot of time lifting weights in the gym. McKenzie’s favorite part about her sport is “the quick paced aspect of the game”. McKenzie also likes the advanced play that comes with higher levels of softball. For McKenzie, the most difficult part about her sport is staying positive even when you lose a game. In 2018, McKenzie’s team won sectionals and was a state semi-finalist. In addition, that year McKenzie was on a nationally ranked travel team. The following year, McKenzie’s team was first in Suburban Council. Next year, McKenzie hopes to become a better player and person, both on the field and off of it.

In addition to her athletic career, McKenzie excels academically. McKenzie has a 4.0 GPA while taking a rigorous course load, including a biotech internship. McKenzie is a member of the National Honor Society and is the vice president of the Student-Athlete Advisory Committee. In addition, McKenzie has maintained her grades to achieve high honor roll every year in her high school career. In her free time McKenzie enjoys hanging out with her friends and family. To help balance school and sports, McKenzie always utilizes any available class time to complete her work, and finishes her remaining school work before attending any other activities.

Coach Penny, who coached McKenzie’s national team, has truly helped inspire McKenzie to push herself even harder. “She was an Olympic softball player as well as one of the most passionate and dedicated coaches I’ve ever had,” commented McKenzie. McKenzie’s coaches have all helped her play to her full potential and accept nothing less. They have helped give her the tools needed to help her excel in her college career. McKenzie would advise a younger athlete that, “if you have any interest in going to college and playing make sure you attend the camps and clinics of the schools you’re interested in!” Next year, McKenzie will be attending the University of Albany where she will be majoring in Human Biology and play division 1 softball. We wish McKenzie the best as she finishes her senior year and prepares for college.