There was a plethora of sporting events for AP over spring break. The girl’s lacrosse team picked up two big wins after falling to Shen 18-7 on 4/23. The Warriors defeated South Glens Falls 19-4 on 4/25 behind 5 goals from Mia Tessitore and 4 from both Anita Reitano and Lauren Meyers. On 4/27, the Warriors crushed Albany 16-3. Mia Tessitore found the nets 4 more times for AP and Anita Reitano added 3 in the win.

The boy’s lacrosse team traveled to Shen on 4/23 but fell 22-2. On 4/25, they defeated Troy 15-7, behind a 4 goal and 4 assist performance from Will Fleming. This was followed up with another 15-7 win over Albany on 4/27. Nick Gelder scored 4 times in the contest and Will Fleming recorded 3 goals and 5 assists. Ap will next take on Ballston Spa away on 5/2.

The Warriors baseball team defeated Burnt Hills 4-3 in a nine- inning game on 4/23. Jack Nichols drove in Joe Milanese to give AP the win in walk off fashion. On 4/25, AP fell to Shen 3-1.

The girls track and field team traveled to Penn on 4/25. The 4×100 relay team of Lydia Ware, Sophia Morone, Lydia Munadi, and Caryn Zimmerman won their heat with a time of 50.85. The boys and girls track, and field teams also took part in the Ballston Spa Throw Off on 4/22. Jamie Cocca broke his own school record in the javelin with a throw of 143’2”.

The boy’s tennis team fell in a tight 5-4 match Burnt Hills on 4/23. Eric Schuman, Tristan Shelhamer, Nate Jamison, and Zach Ryan all won their singles matches for AP. On 4/24, the Warriors fell to Shaker in another 5-4 matchup. AP finished their week with a 7-2 loss to Shen. Eric Schuman and Brian Bourne recorded wins for AP in the match. Up next for AP is Troy away on 5/3.

Good luck to all of AP’s athletes in their upcoming events.

This week’s most dedicated athlete is Morgan Mason. Morgan plays third base and first base on the Varsity Baseball team. Morgan has played baseball for 14 years, after he started

playing the sport when he was 4 years old. Morgan’s favorite part of the sport is “the friendships built, and just the game of baseball in general.” Morgan always looks to do his best to help his team excel. He says he feels achievement whenever he is contributing to his team such as “being able to get hits and help do whatever possible in order to make my team be successful.”

However, Morgan finds the most difficult aspect of the sport when he and his team do not find success. When this happens, he says you have to forget about it and keep moving forward. In order to prepare for this season, Morgan spent time conditioning and weightlifting during the offseason. He hopes that his efforts will help his team go as far as they can this season. Morgan works hard both for his sport and his education. Morgan has maintained an average of 88 throughout high school. This year, he is taking courses such as Physics, Pre-Calculus, and Engineering Drawing and Design. Morgan’s efforts were recognized last year when he was awarded the scholar athlete award at the baseball banquet last year. In the future, Morgan will be attending the College of Saint Rose, and he will play baseball there.

Morgan would like to thank his parents and coaches as they “always are on my side and support me and push me to be better.” Additionally, Morgan wishes to leave a piece of advice

for younger athletes: “Put forth as much effort as you can, and to never give up no matter what because slumps can be overcome. Even if you think you aren’t good enough, if you grind and practice hard, you will become better than good enough.”

We wish Morgan the best as he ends his high school career and begins college next August. 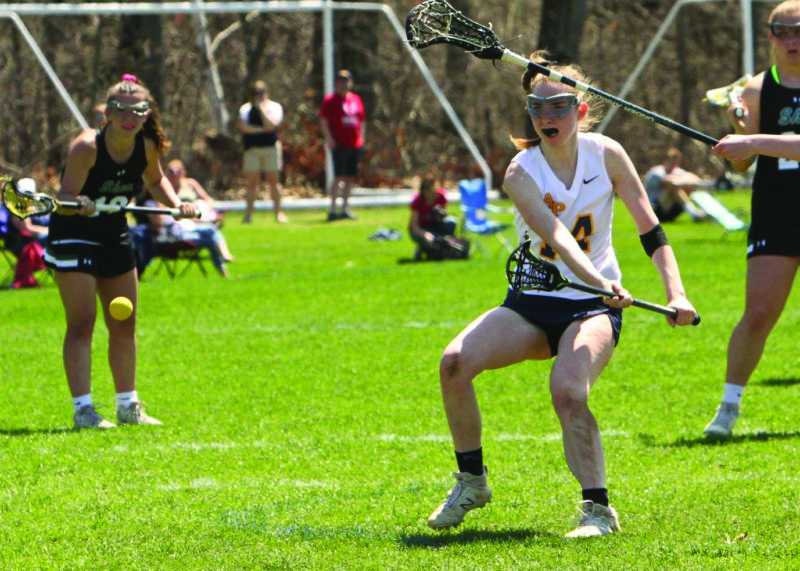 Averill Park junior Lauren Meyers shoots and scores one of her team high 3 goals against Shenendehowa. The Lady Warriors hosted the Plainsmen at APHS on Tuesday, April 23rd, losing 18-7.