AVERILL PARK –  Hello Warrior fans! Thanks to our BOE members, along with the Administration, AP coaches, and student athletes, the following winter sports- Competitive Cheer, Wrestling, and Boys & Girls Basketball have been approved to allow our student athletes to compete in high-risk sports. All of these teams have officially begun practicing last week with games set to start next week. Meanwhile, the AP boys and girls bowling teams are still preceding with their seasons in dominating fashion. 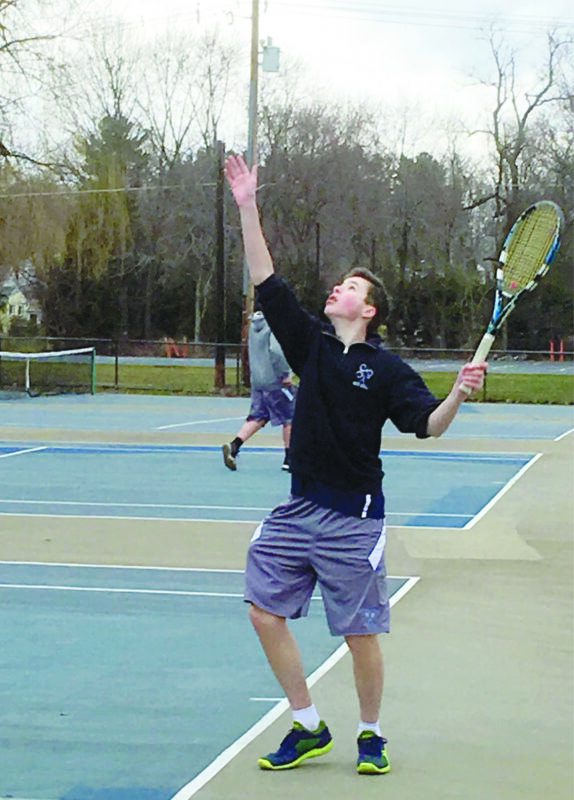 AVERILL PARK – This week’s Scholar Athlete is Augustin Johnson. Augustin plays tennis for the Varsity tennis team. Augustin began when he played with his father. Augustin’s father played a lot, and Augustin would often go out to the courts with his father. Augustin has been playing for almost as long as he can remember, and he can recall having a racket in his hands since he was three. To prepare for his season Augustin practices with his father’s USTA team, and for the past two years he has been playing in an indoor tennis league. Augustin also takes lessons and lifts to keep in shape. Unfortunately, COVID has interrupted his regular training. Augustin hopes to return to the courts soon. Augustin’s favorite part about tennis is the meditative quality it holds. “When you are playing, you are forced to stay in the moment and focus on where you are and how you are moving; the shot you are about to make. It’s an all or nothing battle over a single point, a single shot, and then you move on.” Augustin said that the most difficult part about his sport is maintaining a positive attitude, and not letting your mistakes get to you. Augustin has also played soccer, baseball, ran on the indoor track team, and fenced. Augustin balances playing multiple sports during different seasons by viewing each sport as a way to improve in the rest. “Soccer and track and fencing early on helped me stay fit for tennis, and tennis made me want to stay in shape and also increase my ability to do different things.” Augustin is most proud of his matches where he loses an incredibly close match, saying that is when he learns from his mistakes and improves for the future. This year, Augustin hopes to win more matches than he loses.

In addition to his athletic success, Augustin has succeeded academically. Augustin has a 97.39 GPA while taking a rigorous course load, including Advanced Placement Government and Politics. Augustin also participates in the Coding Club, Robotics Club, International Club, Off Broadway Performers, and the Yearbook Club. In addition, Augustin is a member of the Student-Athlete Advisory Committee and the National Honor Society. Although it was later cancelled due to COVID, Augustin was honored to be nominated for the New York Boys’ State, a week long program that immerses young adults in citizenship and leadership training. To balance school and sports Augustin gives his entire attention to the task at hand. When he is playing, Augustin does not think about school, and when he is not playing Augustin focuses on schoolwork rather than tennis.

Augustin is inspired to work hard by the joy he gets from succeeding, and wants to get himself into a position where he can help other people. If Augustin can work hard and better himself, then he will be a stronger position to help others. Augustin’s grandparents are his role models. Augustin is impressed by their success in their fields, and the amount of people they have influenced. Augustin’s coaches and parents help him athletically excel. His coaches help improve his skills and give Augustin tips. Augustin’s parents helped him get started with his sport and constantly support him. Augustin would like to thank essential workers for everything they do, sacrificing their safety to help ensure everybody else’s, and getting us through the pandemic. Augustin would advise a younger athlete to keep practicing consistently, and to exercise balance. “You might make considerable progress, but unless you keep up the work required to improve, you will have to pick it all up again. Also, don’t take academics and extracurriculars for granted. Your mind needs to be strong just as much as your body to succeed in sports.” While Augustin is still largely undecided on his future career he plans on attending college in the fall and will likely pursue a graduate degree. Augustin is interested in social sciences, astrophysics, and the performing arts, so he hopes his career will be focused on one of these disciplines. We wish Augustin the best as he finishes his senior year and prepares for college.