SCHODACK – My office will collect School Taxes, for Schodack Central Schools and East Greenbush Central Schools, on all properties located in the town of Schodack. We are encouraging all payments be mailed to: Shawn Masters/Receiver of Taxes PO Box 436 East Schodack, NY 12063 or put in the Locked Green Drop-Box located outside of the Town Hall entrance. Collection Periods are:

A receipt will be returned if the complete bill is submitted with payment. No payments can be accepted after the last due date for each school.

Please contact me at 518-477-7935 with any questions or concerns. Office hours will be Monday, Wednesday, and Fridays 9:30am to 4:00pm during the month of September.

Receiver of Taxes, Town of Schodack 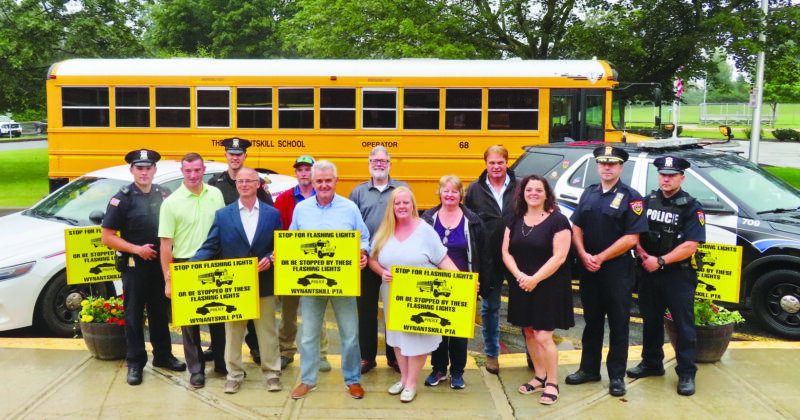 WYNANTSKILL – Schools are open, and that means school buses full of children are back on the roads.

Last week, members of the Legislature teamed up with Rensselaer County Executive Steve McLaughlin and the Wynantskill UFSD at Gardner Dickinson Elementary School to help raise awareness for bus safety.

Every year, President of the Wynantskill PTA Paul Koniowka, kicks off the bus safety campaign with special lawn signs placed throughout the community.

Special thanks to the district’s popular bus driver, Nancy Ruffinen, for expertly maneuvering a school bus into position for the group photo!

School bus safety is a priority for the Legislature. Vice Chair Kelly Hoffman, and Legislators Tom Grant and Rob Bayly recently enacted a local law allowing school districts to opt in to a program that would install cameras on school bus stop arms in an effort to stop drivers from passing stopped school buses.

The Rensselaer County Legislature would like to wish all students, faculty, and bus drivers a safe and happy school year!

Public comment – A local resident discussed concerns of several complaints of neighbors unleashed dogs threatening the safety of her family. She stated that this has been going on for a long time and that she has brought this to the attention of the town several times, as well as other concerns, without improvement. It was determined that Councilman Wohlleber would work with the Code Enforcement Office and stay involved until this and other issues with the neighbors are resolved.

PFOA – Bob Brunet, Water Manager Manger provided an update on the PFOA situation at the Algonquin Beach Middle School. Ultimately, R. Brunet stated that the decision of connecting to our Municipal Water System or use Granular Activated Charcoal (GAC) Filters has not yet been announced but that he believed that they might select the GAC alternative due to its’ faster implementation and lower initial cost. Bob said that, in his opinion, the better option would be to connect to the Municipal Water system because the water comes from Troy and Troy gets its’ water from a ground source (the Tomhannock Reservoir) which is more resistive to PFOA’s.

A continuation from last month’s meeting of Jake Brakes, excessive motorcycle noise (intentionally so), and excessive speeds was discussed. It was decided that Supervisor Hammond would send out the appropriate letters to local trucking companies asking for their cooperation.

The Town Board chose to temporarily fill the position of secretary to the Supervisor with Tiffany Buker for up to 30 hours per week.

These minutes to be approved at the next Town Board Meeting on Thursday, September 16 at 7pm.