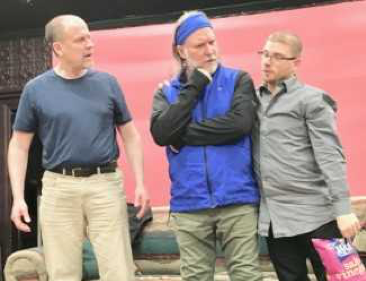 “Why can’t I have more chips?” pouts Steve (Roger Gaboury) as he has some beers with friends, Chris (Jerred Hickey) and Joe (Ed Miller).

At Sand Lake Center for the Arts, Circle Theatre Players present Becky’s New Car, written by Steven Dietz, with special arrangement with Dramatists Play Service Inc.  A comedy about life and the roads we take through it.  An escape from the endless politics, stock market decline, and other daily woes of modern life.  It is a story of the perfect blend of funny moments and the conﬂict a woman faces when being pulled in two directions.  It is about choices and consequence that could believably happen to anyone. Like Yogi Berra once suggested, a person coming to a fork in the road and taking it.

The Trial of Bat Shea Performance at Oakwood Cemetery 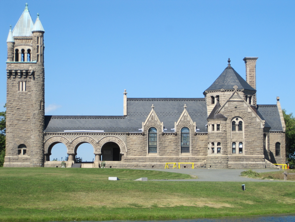 In 1894, Robert Ross was shot and killed as he tried to prevent ballot box stuffing in a local election. Bartholomew “Bat” Shea was wrongfully accused, convicted and executed for the murder. Some say Shea was a scapegoat, targeted by politically ambitious Frank Black who went on to become governor of New York.

On Friday, March 29th, at 7pm the Friends of Oakwood offers author Jack Casey’s riveting play at the Gardner Earl Chapel in Oakwood Cemetery. Reservations are required as seating is limited. Call today to secure your seats: 518-328-0090. Tickets are $15.pp payable at the door.

Filled with hidden evidence and manipulated media, Shea’s trial is transformed into a captivating performance by the Highlight Acting Troupe, directed by Robin Dickinson.

The Friends of Oakwood is a non-profit volunteer group working to support the preservation and maintenance of the non-sectarian Earl Chapel and grounds of Troy’s still-active historic 19th C. Oakwood Cemetery. New members are always welcome. Follow us on Facebook for updates.