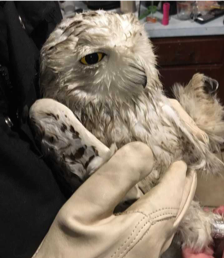 Before & After Photos courtesy of Diane Hime

FORT EDWARD The Snowy owl sprang from the crate and glided across the open field at Friends of the IBA’s grassland bird viewing area. She glanced back over her shoulder once before landing on a fencepost at the edge of the property, where she sat amidst falling snow checking out her surroundings.

The now healthy owl seemed relieved to be returned to the wild.

She was so emaciated when she was found dying of

starvation she didn’t react when her rescuer and his dog approached her, said North Country Wild Care rehabilitator Diane Hime. 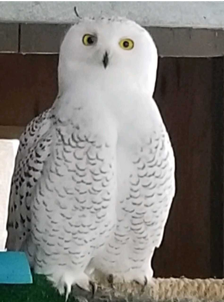 Hime picked up the owl after a call to the organization’s wildlife hotline this past May. She brought the owl to Cara, a Vet Tech with over 18 years of experience rehabilitating sick or injured raptors.

“I knew from just looking at its sunken eyes that it was not well,” Hime said.

She and Cara worked around the clock to save the owl’s life, administering fluids and tube feedings every four hours for three days, until the big raptor could take solid

food on her own.

Hime said the owl, a young female, hadn’t been injured and did not show signs of pesticide poisoning.

“If an owl or other raptor can’t catch prey – whether because prey is scarce, or the bird is young and inexperienced – it soon loses the energy to hunt,” said Laurie LaFond, founder and Executive Director of Friends of the IBA (Important Bird Area). “Then it starves to death.”

Friends of the IBA (FIBA) is a nonprofit land trust conserving critical habitat for endangered and threatened grassland birds.

LaFond watched with a small crowd of volunteers and supporters waiting for Hime to release the Snowy owl at FIBA’s Alfred Z. Solomon Grassland Bird Viewing Area in Fort Edward. She said they held the release at the site to highlight the need to conserve this critical habitat.

Snowy owls have been declining for the last two decades, primarily due to climate change. These majestic residents of the Arctic tundra are at risk of extinction if no conservation action is taken.

Learn more about the birds, FIBA’s work and how you can help at www.ibafriends.org