POESTENKILL – At the July 16 Town Board Meeting Councilman Eric Wollheber attempted to pass a resolution to create an Ambulance District. There was no public notice of this action.

Councilman Wollheber explained that the Ambulance District should have a cap of $225,000 per year from new taxes. That would be the largest tax increase in the history of Poestenkill

Due to our following of Robert’s Rules of Order we could not vote on the resolution that night.

Supervisor Keith Hammond has scheduled a special public meeting to discuss the Ambulance issue on Thursday, Aug. 6, 2020 at 6:30pm at the Poestenkill Fire House.

Less than two weeks ago, Councilman Wollheber sent an email to the heads of the departments of the Town asking for a budget request with a 10 percent reduction. Yet now he proposes to increase taxes up to $225,000 on a new service to replace the excellent service we now have, which costs $0 to the taxpayers.

Councilman Wollheber and Councilman Harold Van Slyke then proceeded to bash Mohawk Ambulance, claiming without evidence that their service has declined. According to members of the Poestenkill Fire Company, Mohawk provides excellent Ambulance service to the residents of the Town.

In the 7 years I’ve been on the board nobody from the Town has ever contacted Mohawk to complain about their service. Mohawk’s service to Poestenkill will only improve when their new station in Brunswick is complete.

I am tired of politicians trying to advance their careers by bashing the police, fire departments, and first responders. These men and women are our true heroes, running in when everybody is running out (never forget 9/11!).

Please come to the public meeting on Aug. 6 and let your voice be heard.

You can view the proposed resolution here: https://ibb.co/jW4YbDY

POESTENKILL – Due to COVID-19, the Town Board Meeting was held at the Fire Station.

Public Comment – Councilman Hass stated that the State of Emergency was still noted on the Town website and asked if that was necessary. Supervisor Hammond was in favor of ending the declaration. Councilmen Van Slyke and Wohlleber voiced their concerns. Motion made by Supervisor Hammond, seconded by Councilwoman Butler to end the State of Emergency was passed by a vote of 3-2 with Councilmen Van Slyke and Wohlleber voting no.

Ambulance – Councilman Wohlleber stated that he Ambulance Committee which was formed in January by the Board has not been able to meet or make significant progress due to the COVID 19 pandemic. Councilman Wohlleber discussed a resolution to create a boundary, he proposed the Town line limits, and then begin the Public Hearing process. There was much discussion and a special meeting to continue this measure has been scheduled for Thursday, August 6th at 6:30pm at the Fire Station.

Resolution recognizing the services of Vivian Kelly as Deputy Town Clerk. Prior to this position she served for 20 years as Town Clerk, passed unanimously.

These minutes to be approved at the next regularly scheduled town board meeting scheduled for Thursday, August 20th, at 7pm – at the Poestenkill Fire Company.

For more information go to www.PoestenkillNY.com

POESTENKILL – As posted on our Town’s website, Spring Clean Up took place on 4/27/20 through 5/1/20, with restrictions as listed. During that week our Highway Department collected household brush and fallen tree limbs to assist residents with yard clean-up caused by winter storm damage. Since that time numerous residents have continued to clear acreage around their homes of brush, vines, trees, dead limbs, and even stones with the expectation that the Town will continue to pick up and dispose of these materials. Our highway crew has since made four trips throughout the town in an attempt to satisfy homeowner requests’ but we have neither the equipment nor the manpower to continue collecting the volume of debris that is being created. Some towns possess a grabble truck capable of loading massive amounts of brush, we do not, employees therefore must load by hand oftentimes causing injury to themselves. Our highway department is small with limited personnel and equipment but functions very efficiently as it moves between activities to maintain low operating costs which results in low annual highway taxes. Be considerate of our time and resources; roads need to be paved, ditches cleaned, culverts and bridges maintained and equipment serviced all of which is being accomplished by only a crew of six. Please think of alternative actions to dispose of the waste that is being generated by any landscaping activities. Thank you for your consideration and cooperation.

RENSSELAER COUNTY – The Legislature unanimously voted to recognize August as National Water Quality Month. Founded in 2005 by the Environment Protection Agency (EPA), National Water Quality Month promotes clean water and resists pollutants from dumping industrial effluents, agricultural runoff, leakage of untreated waste, and products and chemicals used at home. As a county that has seen the devastating effects of commercial pollutants in our water supplies, we continue to be committed to water quality.

The Legislature also recognized September as Ovarian Cancer Awareness Month, to call attention to this disease. Each year, approximately 21,980 women will be diagnosed with ovarian cancer, and it is imperative to raise awareness and provoke treatment.

Racial Justice for Black People and People of Color – A resolution sponsored by members of the Minority to end systemic racism was defeated on the floor. The Minority Legislators plan to submit the resolution again for the August meeting.

The legislature also authorized deep cleaning services in polling locations before and after the June 23rd primary and early voting locations to ensure safe and sanitary voting.

Commending Troy Police at “Troy Rally for Black Lives” – On June 7th, 2020, the City of Troy hosted a rally drawing 11,000 people for the Black Lives Matter movement. The legislature unanimously commended the Troy Police and several other agencies for meticulously coordinating rally plans and responsibly respecting the protesters. 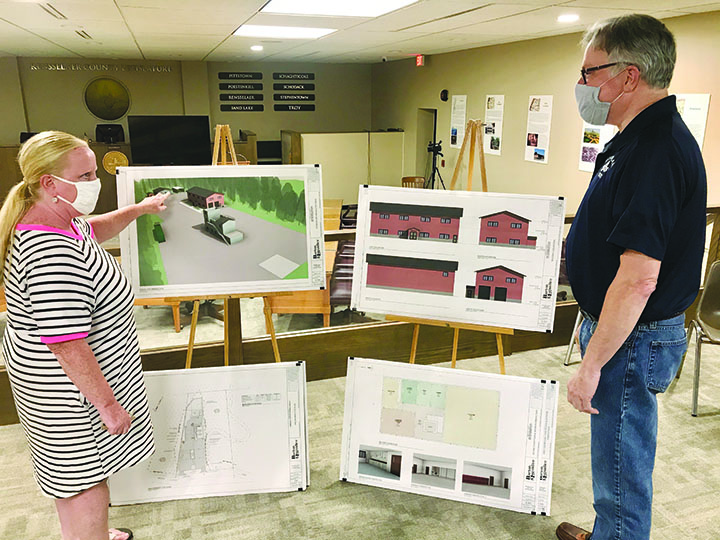 RENSSELAER COUNTY – Vice Chair of the Legislature Kelly Hoffman and Legislators Tom Grant and Todd Tesman (missing from photo) reviewed plans for the new Rensselaer County Fire Training Complex in North Greenbush last week. The current training facility is being demolished to make way for the new state of the art facility that is expected to be completed early next year.

Replacement of the outdated facility has been a priority of County Executive Steve McLaughlin, and the members of the County Legislature have been very supportive of this important project.

The Legislature is extremely appreciative of the dedication of our volunteer firefighters and emergency first responders, and they want make sure that they have safe and modern training facilities. These facilities are critical to training our valued first responders so that they may better protect our communities.

Tracey Rex Reports to the People of Schodack

SCHODACK – I believe staying in touch with constituents is an important part of serving in elective office. This report, published every month since I took office in 2016, is an example of my commitment to keeping Schodack residents informed about town government news and community events. All Town Board, Planning Board, and Zoning Board meetings can be viewed live or at a later date at: www.townhallstreams.com/towns/schodack.

I am happy to report that meetings of both the Planning Board and Zoning Board of Appeals have resumed. Thank you to the men and women who serve on these boards and to Nadine Fuda (Director) and Melissa Knights (Secretary) who carry out the important work of our town’s Planning and Zoning Department.

During July, in recognition of the extraordinary sacrifices that Purple Heart recipients have made in serving our country, the Town Board adopted a resolution designating the Town of Schodack as a Purple Heart Community. The community designation is given by the Military Order of the Purple Heart, an organization for combat-wounded veterans that works on legislative initiatives and provides services for veterans and their families.

It is great to see construction underway for the Schodack portion of the Albany-Hudson Electric Trail, which will be a 36-mile bicycle and pedestrian route from the City of Rensselaer in Rensselaer County to the Town of Greenport in Columbia County. According to recent reports, New York State is on schedule to complete construction of the trail later this year. I look forward to this project’s completion and the enjoyment it will bring to so many local families. For more information, visit www.ahettrail.org.

Recently, I stopped by a new business in town — Three Guys Bakery Pizza located at 1607 Columbia Turnpike — to meet the owner, thank him for investing in our town and enjoy a great meal. Please continue to support our local businesses during these difficult times.