Primary Election locations for The Town of North Greenbush

If you should have any questions or concerns pertaining to Primary Day, please feel free to contact my office and I will be more than happy to assist you in any way that I can. My office hours are Monday through Friday, between the hours of 8:00 a.m. to 4:00 p.m. My telephone number is 518-283-4306.

The Rensselaer County Legislature unanimously passed the Reimagine Rensselaer Program that will invest over $26 million into update county facilities, county services, and critical sewer infrastructure. A majority of this funding comes from the record surpluses achieved over the last few years of prudent fiscal management by the County Executive and the Legislature.

One of the top priorities of the Reimagine Rensselaer initiative is the purchase and retrofitting of the former Rose and Kiernan building in East Greenbush for county offices.

“We have been very fiscally responsible and have provided all essential services while building significant reserves for several years. This move will truly modernize county offices and help streamline our operations in other buildings”, said Vice Chair Bob Loveridge- East Schodack.

It is important to note that the Reimagine Rensselaer program does not rely on borrowing to finance this historic investment.

“Bringing our county offices into the 21st century is an important priority for our residents and our employees. Years of smart budgeting has given us the ability to pay for these ambitious projects without borrowing and burdening future generations”, said Legislator Scott Bendett- Averill Park.

The program will also finance the purchase of highway equipment, emergency radio equipment, and the paving of more County roads. The replacement and improvement to the county operated senior centers is also included.

The Rensselaer Senior Center is an important place for our Rensselaer resident, and I am pleased to support the Reimagine Rensselaer County Plan that plans to find a new center for our seniors”, said Legislator Brian Stall- Rensselaer.

“This is a huge step forward for Rensselaer County. It is a large investment in our County’s future, and a sound financial decision that received the full support of the Minority Legislators from Troy”, said Chairwoman Kelly Hoffman- North Greenbush.

Women’s Right to Safe Reproductive Health Care – This month, the legislative minority brought forth a resolution supporting safe reproductive health care for women in response to the leaked Supreme Court decision that would reverse the long-standing precedent established by the Roe v. Wade decision. However, the resolution failed in the Rules Committee after being blocked by the committee’s Republican and Conservative legislators, including Chairwoman Kelly Hoffman, and it never made it to the floor of the legislature for a vote.

Common Sense Gun Reform – The legislature minority also brought forth a resolution urging both state and federal representatives to adopt various methods of common sense gun reform, including increased background checks, lengthened waiting periods, and a permanent ban on assault weapons. This resolution was submitted in response to the many mass shootings seen across the United States during the 21st century, including the more recent ones in Buffalo and Uvalde. However, this resolution also failed to make it to the floor, as it was tabled by the Republican and Conservative legislators on the Rules Committee who proposed a bipartisan edit to the resolution. After a week, no motion has been made on this front as of yet.

Pride Month – The legislature unanimously passed a resolution declaring the month of June as LGBTQ+ Pride Month in Rensselaer County. The resolution was introduced by the entire legislative minority and co-sponsored by only three of the thirteen Republican legislators.

NEXT MEETING – Tuesday, July 12, 2022 in the Rensselaer County Chambers located on the 3rd floor of the Ned Pattison Government Center, 1600 7th Avenue, Troy.

On June 15, 2022, the Environmental Protection Agency (EPA) proposed new health advisory levels for PFOA and PFOS chemicals, far lower than the current federal and New York State standards. The EPA’s proposal of 0.004 parts per trillion (ppt) for PFOA is significantly lower than the current enforceable federal level of 70 ppt or New York State’s enforceable level of 10 ppt. This can only lead to one conclusion: no level of these compounds in drinking water is acceptable.

It has been almost 18 months since PFOA and PFOS were detected at Algonquin Middle School as well as numerous homes nearby tested following the discovery at the school. To date, no source for the pollutants has been found. In light of the EPA’s announcement, Concerned Citizens for Clean Drinking Water (CCCDW) calls on state and county agencies to use a greater sense of urgency in finding the source or sources of contamination within the Town of Poestenkill.

CCCDW is an ad-hoc group of Town of Poestenkill residents formed to share information and advocate at all government levels regarding the PFAS contamination found at Algonquin Middle School, nearby homes, and other sites in the town that have a history of PFAS usage. 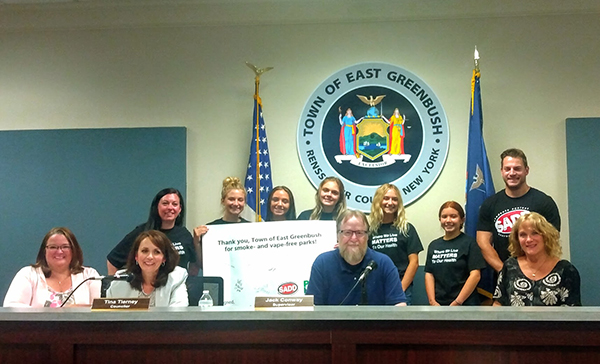 On May 18, the Town of East Greenbush unanimously passed a local law making all town property smoke-, vape- and tobacco-free. Effective immediately, the smoking and vaping of tobacco and cannabis, and the use of smokeless tobacco products is prohibited anywhere on town property to protect residents from exposure to secondhand smoke, secondhand aerosols from vaping devices, and the byproducts of smokeless tobacco.

The Columbia High School SADD Club (Students Against Destructive Decisions) showed their appreciation by presenting the Town Board with a signed banner thanking them for creating an environment in which town residents can breathe easier. Kelsey Reagan, speaking on behalf of the club, said, “Where we live matters to our health and well-being, and breathing in secondhand smoke can be just as harmful as smoking yourself, and lead to problems like asthma attacks, respiratory issues and infection, and ear infections. Thank you for keeping the town parks safe and clean.”

Capital District Tobacco-Free Communities (CDTFC) also presented the Town Board with free signage that the Town intends to post on town property alerting visitors that the property is smoke- and vape-free. Municipalities and businesses interested in making their property smoke- and vape-free can access help and signs by contacting CDTFC at ClearTheAir@nullSmokeFreeCapital.org. 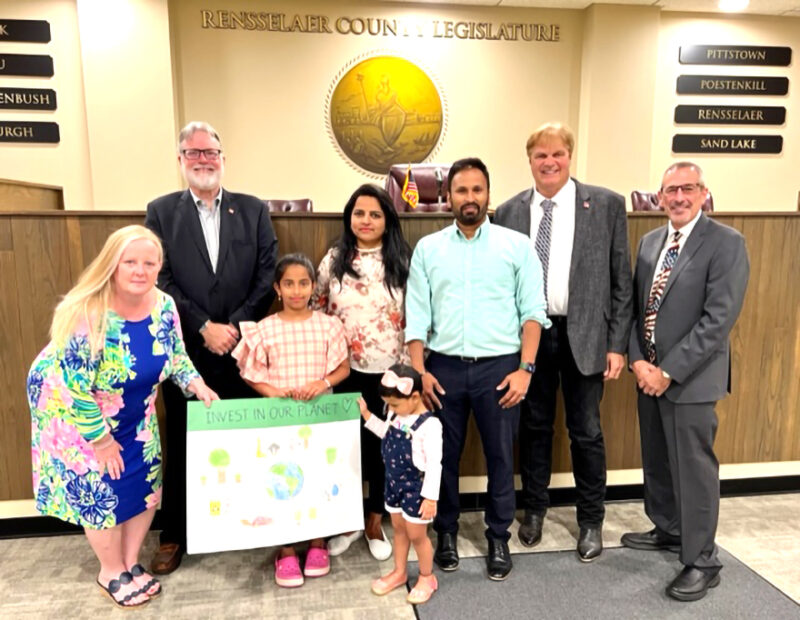 Chairwoman of the Legislature Kelly Hoffman was joined by her District 2 colleagues Rob Tom Grant, Rob Bayly, and Leon Fiacco as they welcomed the Kuppireddy family of East Greenbush to the Legislature. Their daughter Sahara took home First Place in the Legislature’s Earth Day Poster Contest in the K-2 category. Sahara attends Genet Elementary School in East Greenbush, and was thrilled to learn that her “Invest in Our Planet” poster was the top pick of the Legislators. Sahara took home a gift bag full of prizes, and promised to enter the contest again next year.

North Greenbush Food Truck Night Is The Perfect Choice. So if you haven’t been, YOU SHOULD!!! The Food Truck Event is every Wednesday Night until the end of August @ town hall. The attendance has been fantastic and so very enjoyable!! Stop by between 4 pm – 7 pm and pick up a quick delicious dinner with NO COOKING at home needed or bring a chair and enjoy the great outdoors with your friends and family. Picnic tables are available, but are on a 1st come 1st serve basis. It is my pleasure to direct traffic and see everyone each week, along with Kathy who volunteers. I hope to see you there this Wednesday night!