Cash payments MUST be the EXACT amount of the bill(s). Please make checks payable to Heather Werner-Tax Collector. Mail payments to PO Box 214 Nassau, NY 12123. Penalties will be assessed on payments made after January 31, 2022 as per the tax bill. Reminders sent in March will include a $2.00 penalty fee.

Please note: The office of the Tax Collector will be CLOSED Friday and Saturday January 21 and 22, 2022.

WEST SAND LAKE –  PLEASE TAKE NOTICE that the regular meetings of the Best-Luther Fire District will be held on the First Thursday of the month for the 2022 year, held at 7:00 p.m. at the Best-Luther Firehouse, located at 303 Old Best Road, W. Sand Lake, NY 12196. The location and time of the meeting may be changed by further resolution of the Board of Fire Commissioners upon proper notification to the local media of such change.Best-Luther Fire District, 303 Old Best Road, West Sand Lake NY, 12196. Phone/Fax: 518-283-5641. blfdfiredistrict@nullgmail.com

Councilman Jack Rogers Reports to the Town of North Greenbush

NORTH GREENBUSH – A public hearing was held on December 22, 2021 to opt out of allowing cannabis on site consumption. I voted NO on this local law since the majority of emails from residents and discussions at the hearing were to opt out of dispensing and on site consumption. Information was vague and additional information was needed on this issue to make an informed decision.

The first order of business for 2022 was an Organizational meeting. Several new appointments were made to boards and committees. I was removed from the Board of Ambulance Commissioners along with Johanna Flanigan. My removal was politics pure and simple. I was dismayed and so should the residents of North Greenbush at the removal of Johanna. Johanna has been a Registered Nurse for 50 + years, she has critical care experience, and is a lifetime member of the North Greenbush Ambulance Association. Town residents lose out on her years of experience and knowledge. Johanna was replaced without explanation. Jo I wanted to personally thank you for your time and talents regarding emergency care. I will continue to advocate for the North Greenbush Ambulance Association.

Next Public Hearing is scheduled for February 10th at 6:50PM. This is regarding establishing no parking on Thompson Court.

Check out the town website for information, announcements, and town board meeting minutes at townofng.com or contact me at jrogers@nullnorthgreenbush.org. I also post information on my Facebook page Councilman Jack Rogers. You can attend meetings in person or live stream at https://townhallstreams.com/towns/northgreenbush.

Get involved and informed about what is happening in the Town of North Greenbush.

Next Town Meetings are as follows:

RENSSELAER COUNTY – On January 4th the legislature met for an Organizational Meeting to confirm leadership positions, accepting the Rules of the Legislature and to designate the official newspapers that will be used to inform residents of important happenings of the legislature that are required to be posted.

The Albany Times Union was replaced with the Eastwick Press, along with the Troy Record, as the designated newspapers to publish important dates, notices, hearings, local laws and other matters required by law to be published. This legislation is valid through 2025.

The Minority legislators objected to the elimination of the Albany Times Union and offered an amendment to add the Times Union because it reaches more residents of RC than any other newspaper. The amendment failed along party lines. The Republican majority deemed it unnecessary.

A Public Forum was held on January 5th and many constituents attended to voice their concern about several topics, including the S.A. Dunn Co. LLC Landfill and a pending application to renew their permit. An attorney from O’Connell & Aronowitz spoke and stated that the County has the jurisdiction to intervene and needs to get more involved in the investigation and must take immediate action against the renewal process.

In addition, many speakers spoke passionately about the decline of Democracy and transparency in government:

• Faith and trust in government, back door deals and the unprecedented raises for County Executive and select staff 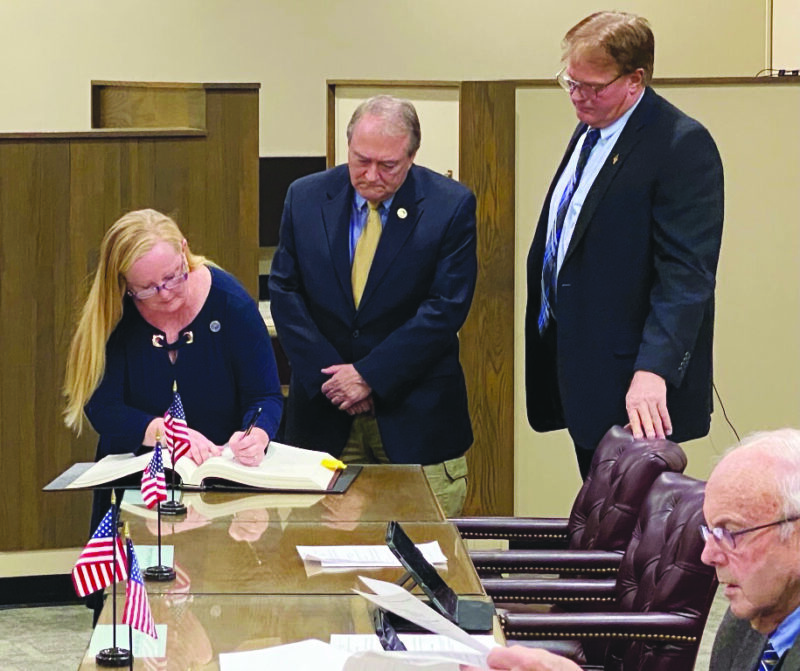 Robert Loveridge of East Schodack was chosen as Vice-Chair of the Legislature, and Rob Bayly of Poestenkill was picked to be the Chair of Finance, replacing Loveridge.

Ken Herrington of Brunswick kept his position as Majority Leader.

The new leadership team is committed to keeping Rensselaer County moving forward in a positive direction.

“It is a privilege and honor to have been chosen to serve as Chairwoman of the Rensselaer County Legislature. I am hopeful to see what the next four years bring and know we can accomplish great things and create exciting opportunities working together for the residents of our county”, said Hoffman.

The new leadership team signed the oath book during the January 4th Organizational Meeting of the Legislature.

NASSAU – The Town of Nassau has outlined plans for the Town’s newest park. Under the preliminary proposal, announced by Supervisor David Fleming, the Town’s multiple purpose 22-acre parcel, located on US Route 20 between the Village of Nassau and Lyons Lake Road, would be opened to walking trails. A significant feature of the parcel is a small brook and wetlands. The Town Board authorized a naming contest for the unnamed brook which may lead to the naming designation for the new town park.

Through partnerships, the work of other nonprofits, and community volunteers, Nassau has gone from no public preserves and open public land to six public preserves that provide access to diverse natural beauty across the town. These preserves have become popular destinations in the area and have helped draw day trippers to Nassau.

With this new park under development, Nassau will now have over 650 acres public acres of varying terrain to explore. All the parcels have been developed with volunteer assistance, grants and donations.

The next step in the development process, according to the Nassau Town Board, is to engage residents of all ages to participate in the brook naming contest for this new park. The focal point of the proposed area is a now nameless brook that runs through the 22-acre parcel. Local students and families are being asked to participate in this contest. The Board is looking to designate a name that focuses on Nassau’s local history or natural resources. The Board has also suggested names that recognize the indigenous peoples of the area to local heroes of the Civil War and the Anti-Rent War.

Submissions are encouraged to supervisor@nulltownofnassau.org. The Town is expecting to make a selection for the name of the brook and possibly the new park, at their March 10, 2022 meeting.