A Dark Dark House at Sand Lake Center for the Arts

SAND LAKE – Sand Lake Center for the Arts presents a Zoom Reading of A Dark Dark House by By Neil LaBute. January 31 at 2:30pm. All shows will be streamed live via Zoom • Get your tickets here: • $10 Directed by Melanie Sheldon. In a Dark Dark House is produced by special arrangement with Broadway Play Publishing Inc, NYC www.broadwayplaypub.com.

EAST NASSAU – Experience Rensselaer Land Trust’s popular Kinderhook Creek Preserve in winter! RLT will host a winter hike at the Preserve in East Nassau on January 30 from 10 am to 1 pm. The Preserve’s wide smooth trails are perfect for snowshoeing, and if there’s not enough snow, we’ll enjoy a hike. We’ll go to and along Kinderhook Creek, about two scenic miles with easy grades. Dress appropriately for the weather with extra layers that can be taken off or added as needed. Microspikes may be needed if trails are icy. Bring water/hot drink and snacks.No charge.

Due to current public health mandates, registration is limited to 9 people. Masks are required, and participants from separate households are encouraged to stay six feet apart. Do not attend if you are not feeling well.

Registration in advance is required, by emailing Peter Wood, trip leader, at peterrmapleacres@nullgmail.com.

“Stono” is Step AFRIKA!’s interpretation of the 1739 insurrection of 20 enslaved Africans, who marched south toward a promised freedom in Spanish Florida, waving flags, beating drums, and shouting “liberty!” This brave act of rebellion against British rule in Colonial America predates the Boston Tea Party. The Stono Rebellion was suppressed and slaves lost the right to use their drums under The Negro Act of 1740, but they began to use their bodies as percussive instruments. Those who practiced this new mode of survival and activism earned the name of “Drumfolk.” Their percussive movement gave rise to some of Black culture’s most distinctive art forms, including stepping, tap, hambone and the ring shout.

STEP AFRIKA! combines African and modern dance to perpetuate the style known as stepping – a high-energy art form, punctuated with claps, kicks, stomps and chants. Based in Washington D.C., STEP AFRIKA! tours extensively with its vast repertoire and arts-in-education programs. STEP AFRIKA! performed at the Hudson Valley in 2013 and 2017, and is returning (virtually) due to popular demand.

Founded in 1953, Hudson Valley Community College offers more than 80 associate degree and certificate programs in three schools: Business and Liberal Arts, Health Sciences, and Science, Engineering, Technology and Math, and an Educational Opportunity Center for academic and career training. It is one of 30 community colleges in the State University of New York system and is known as a leader in distance learning initiatives and workforce training. The college has more than 80,000 alumni.

Grafton—Dyken Pond Environmental Education Center is hosting a self-guided Groundhog Day Shadow Hunt for families and people of all ages.  Groundhog Day is all about shadows. How many of our hidden animal shadows can you find on the trail this February? Guess the animal by its shadow and discover its winter secrets.

Visitors can walk the Cherry Trace Trail any time during February to find 15 animal shadows. Guess the animal and what it’s doing in winter and other fun facts. The entire trail is one half mile in length. Further directions are posted at our main sign.

For a complete winter program schedule, please visit our website at www.dykenpond.org.  We encourage you to also follow our Facebook page where we will post new pop-up outings when the snow flies and conditions are just right for getting outdoors. Dyken Pond Environmental Education Center is a Rensselaer County Park open daily during daylight hours for hiking, fishing, cross-country skiing and snowshoeing.

TROY – Hudson Valley Community College presents Dorothy Butler Gilliam, trailblazing journalist, during a live-streamed event on Thursday, Feb. 4 at noon. Gilliam’s talk is free to the public. Information to gain access to the talk and to submit advance questions for the Q&A is available at www.hvcc.edu/culture.

In 1961, Gilliam was the first Black woman reporter for The Washington Post. She later became an editor and a columnist for the paper, retiring in 2003. During her six-decade career, Gilliam witnessed and documented tremendous social and political change, and also has played an important role in the ongoing struggle for civil rights. She is the author of “Trailblazer: A Pioneering Journalist’s Fight to Make the Media Look More Like America,” a powerful memoir in which she reflects on her upbringing in the Jim Crow South, awakening to her own potential, the challenges of socially-segregated Washington D.C., and her marriage to the painter, Sam Gilliam.

Throughout her career, Gilliam nurtured other journalists of color and fought to diversify newsrooms across the United States. Her civil rights activism is featured in three documentaries: Freedom’s Call, Southern Journalists Who Covered the Civil Rights Movement, and Hope & Fury: MLK, The Movement and The Media. Gilliam appeared regularly on PBS television and hosted her own show on BET. 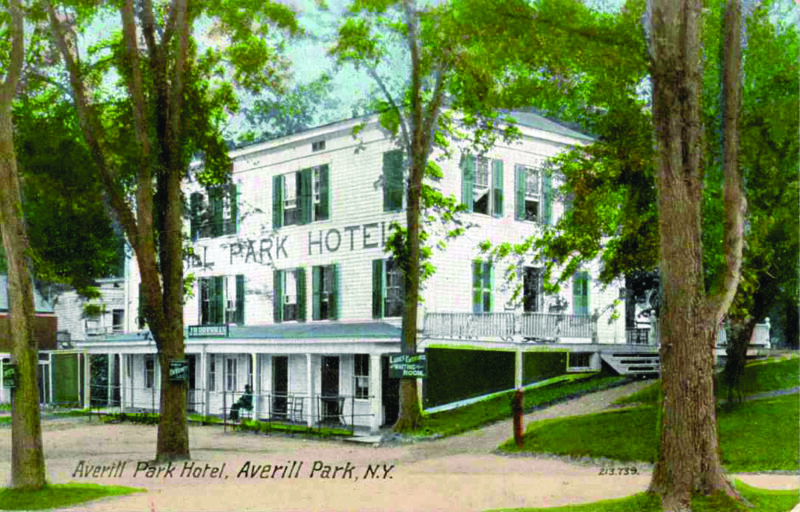 SAND LAKE – On Tuesday, February 9, the Sand Lake Historical Society will present the story of Adam Blake, Jr. virtually at the Sand Lake Town Hall in Averill Park.  Adam Blake, Jr was the adopted son of a former slave who was in the employ of Stephen Van Rensselaer. Adam Blake, Jr, despite little formal education, went on to become one of most successful businessmen and entrepreneurs of any race in 1800s Albany.  Perhaps best known for his Albany Kenmore Hotel. While Kenmore was being built, Mr Blake managed the newly reopened  Averill Park Hotel in the Town of Sand Lake!

Blake will be portrayed by Donald Hyman, Albany educator and writer who is well-known for his many performances in the Capital District acting community.

Due to COVID, the performance will be telecast on Spectrum Cable TV channel 1303 at 7 pm. and live streamed online (available later for playback) via https://townhallstreams.com/towns/sand_lake_ny .  We hope to offer seating if possible.  As the date draws nearer; please call 518 527-9926 for additional information.  COVID precautions will be followed.  Like us on Facebook or at Sandlakehistory.org.

New Art Show at Sand Lake Center for the Arts

SAND LAKE – Sand Lake Center for the Arts will be presenting Found Object Assemblages by Alan Opresko and paintings by Leslie Berlinsky – through February 27. Free and open to the public every Saturday from 12 to 3.

SAND LAKE – The Kiwanis Club of Sand Lake is supporting a charity fundraising drive within the Averill Park Central School District to benefit the Capital Region’s Ronald Mc Donald House. The fundraising drive has been extended until February 28th since schools have not been in session for over four months. The goal remains to collect enough pull tabs from soda, beer, soups and pet food cans to fill a school bus!

We ask that parents of our school children and other interested citizens join this effort by removing and collecting as many pull tabs as possible during the months ahead and while schools remain closed take them to the Town Clerk’s office at Sand Lake Town Hall. When schools reopen all collected pull tabs may again be dropped off at the office of one of our three elementary schools, the Algonquin Middle School’s office or to the office at the Averill Park High School.

Please join us to help the Ronald McDonald House as it continues to offer a haven of comfort, love, hope and support – free of charge – for critically ill children and their families. Thank you.