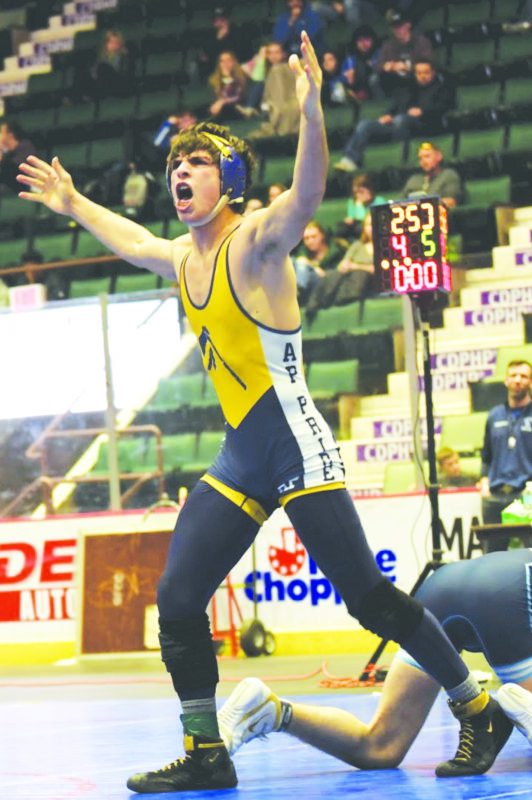 AVERILL PARK – This week’s Scholar Athlete is Sean Malenfant. Sean would be a captain on the Varsity wrestling team, and ran in Varsity cross country. Sean also rides horses at home and has competed in equestrian shows. Sean began wrestling in first grade after being fascinated with the sport. Seeing his father coach, and envying the camaraderie that the team displayed, Sean knew wrestling was something he wanted to be a part of. To prepare for his wrestling season Sean runs, lifts, and does drills outside of practice.

Sean says the best part of wrestling and running cross country is how humbling the sports are. “Both sports test you individually and what you put into the sports is what you get in return. When it comes to wrestling I feel like it tests me not only physically, but mentally. The best wrestler has to be well rounded, fast, strong, agile, conditioned, toughness, and have wits. I find it to be the ultimate test of what you’re made of and being successful is extremely rewarding.”

Sean also says that the most difficult part about wrestling is getting ready to start the match. Because the match is only one person against one person, it takes a lot of pride to stand in front of your friends and family and put yourself at risk to lose. Wrestlers respect each other for the hard work necessary to prepare yourself, and Sean says that this has truly shaped him by giving him the confidence necessary to take-on the real world. Sean currently holds the record for the Averill Park wrestling team for most wins with 152 victories. He is also a two-time class B champion, and is a two-time section 2 champion/state tournament qualifier. Last year Sean managed to place fifth in the state tournament. Sean says that he focuses on small goals in wrestling, such as focusing on his mindset before a match, staying in shape, and keeping his technique sharp. Sean is especially proud of his first Section II title because he had broken his hip earlier in the year and had to overcome his injury and beat someone who pinned him the year prior.

In addition to his athletic success, Sean excels academically. Sean has a quarter one average of 97.5, and this year is taking Advanced Placement Government and Politics, Advanced Placement Statistics, Engineering Drawing and Design (EDD), Digital Electronics, Detective Fiction, and Physics. Sean is also a member of the National Honor Society, the Equestrian Club, and Journalism Club. Sean spends his free time by training for wrestling or riding horses.

Sean says that his dad has helped push him in wrestling, and Sean can certainly credit some of his success to his father. He also noted that his partners Andrew Fountain and Mason Lumbra have been with him through thick and thin, and has helped make him the wrestler he is today. Sean plans on going to college for construction management, and plans to wrestle in college. Sean would advise a younger athlete to never give up. “Wrestling can be very discouraging when you’re new to the sport. Overcoming challenges and hardship is how to become great. Not winning easy matches. Never be scared to face a challenge. When you face that challenge, face it with an open mind, learning from your mistakes is everything and every wrestler is different. You need to adapt to overcome what your opponent will throw at you. Wrestling is a sport that you can achieve anything with the right mindset. Approach challenges with confidence and pride, not fear or self doubt or even overconfidence. The more you wrestle the better you will get, it’s that simple. Put the time in, it will be worth it. Approach wrestling like life. Never lay down, never give up, especially when no one’s watching.” We wish Sean the best as he finished his senior year and prepares for college.