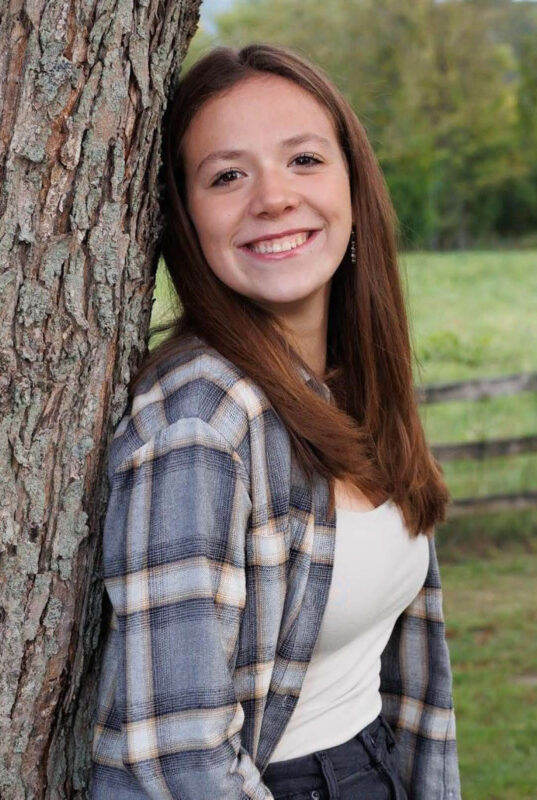 This week’s Scholar Athlete of the Week is Caroline Antolick. Carly is a captain on the Varsity swim team, where she prefers the breaststroke and the butterfly. Carly’s mother was a swimmer at the collegiate level, and got Carly in the water when she was five years old. Carly has been swimming ever since, and swims with the Starfish Swim Club outside of the school season. Carly’s favorite part about swimming is the friends she has made in the sport. “I’ve met a lot of wonderful people that I otherwise would not have and I consider myself really lucky.” Carly feels particularly proud of the team whenever a member qualifies for the sectional championships. “Every time someone has qualified, every single member of our team has cheered and rushed to the end of their lane to give them a hug or a high five, which I think truly reflects the spirit and camaraderie of this team.” Carly noted that swimming has a large time commitment attached: the school team practices for two and a half hours six days a week. Carly was instrumental in forming a scholastic team for Averill Park. In her freshman year of high school, Carly held frequent meetings with the athletic director to get Averill Park a swim team. The result was the merger between Troy and AP, which became the TAP swim team in Carly’s sophomore year. Carly’s greatest athletic achievement is breaking her team’s record in the 100-yard breaststroke. The previous record had stood since 2000, until Carly swam a 1:11.09, breaking it by over a second. Last year, Carly began to deal with severe burnout after swimming for so long. She took some time off and returned when she felt prepared to do so, and is now working towards her goal of qualifying for the state championships meet in the 100-yard breaststroke.

While Carly succeeds in the pool, she also excels academically. Carly has a 97.94 GPA while taking difficult courses this year, including Advanced Placement Biology, AP Calculus BC, AP Government and Politics, AP Language and Composition, and French 5. Carly is the vice president of Averill Park’s branch of the National Honor Society, founded a volunteer organization called Brighten A Day Averill Park, and is a member of the Student-Athlete Advisory Committee. She is also a volunteer peer tutor and swim coach. Carly is proud of her scores from her AP tests last year; she studied hard and feels that it has paid off. To balance school and sports, Carly uses her study hall time as effectively as she can, and tries to limit distractions to help her study better.

Carly’s teammates and her family inspire her to do well in her sport and push Carly out of her comfort zone. Carly’s teammates help her excel in her sport by getting her to work hard during practice and cheering Carly on at meets. Carly would advise a younger athlete to, “find a good group of friends within your team who will push you to achieve your dreams.” Next year, Carly plans on attending college to major in either biology or forensic science and earn a master’s degree. She hopes to eventually work in the FBI. We wish Carly the best as she finishes her senior year and prepares for college.