The girls tennis team picked up their second win of the season on 10/12 with an 8-1 victory over Columbia. Singles winners were Sofia Stern, Sydney Ferguson, Lili Bursey, Carly Hunter, and Megan Walsh. Doubles winners were Dayna Densmore & Avery Kittlseon, Julia Gelder & Allison Lapinski, and Sarah Wallace & Lauren Paris. On 10/17, the girls team lost 9-0 to an undefeated Bethlehem team. The tennis team will travel to Colonie for their next match on 10/23.

I will be back next week to report Averill Park scores. Go Warriors! 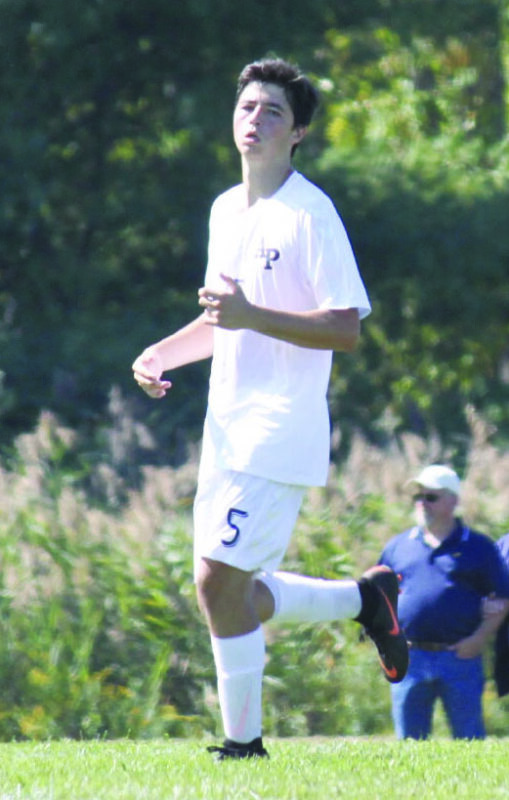 AVERILL PARK – This week’s scholar athlete is Colin Hansen. Colin is a captain for the Varsity Soccer team, where he plays as a center defensive midfielder. Colin also participates in basketball and outdoor track. Colin has been playing soccer since kindergarten, and says his favorite part of the sport is playing with the same team each year. In the summer, Colin is employed at a Triathlon camp where he works hard every day, and Colin bikes when he can in preparation of his soccer season. Last year, the soccer team managed to beat Bethlehem (one of the best teams in the state) 1-0, and this year Colin hopes the team can qualify for the Suburban Council Tournament being held in place of Sectionals this year.

In addition to the three sports he plays, Colin manages to excel academically. Colin has a 91 GPA while taking three Advanced Placement classes: AP English, AP Biology, and AP Government and Politics. Colin is also in the National Honor Society, participates in Averill Park’s Youth and Government, runs triathlons, and enjoys mountain biking in his little spare time. With his full schedule, Colin manages his time by working efficiently and completing as much work as he can in his breaks during school. Colin recognizes that he must be socially flexible and properly balance his time to succeed both academically and athletically.

Colin’s parents have helped him every step of the way, giving him rides and helping him improve in his athletic achievements. However, Colin knows that his parents won’t be able to watch over him in college, so he tries to motivate himself. He also draws his inspiration from teammates because he knows that they all count on each other to win. Colin would advise younger athletes to “just keep working on your craft. Keep trying to work on that part of the game that you are weakest at. If you don’t have a weak part of your game you will be special.” He also says to be flexible and agree with wherever the coach thinks you will play best. Colin is not yet sure where he wants to go to college, but he is interested in engineering. He would also be interested in playing soccer for his college if he has the opportunity. We wish Colin the best as he finishes his senior year and prepares for college.