AVERILL PARK – AP had a very busy week of action as we turned into the latter half of the fall sports season.

The football team had a stunning 21-20 win against Lasalle on 10/15. Lasalle scored on their opening drive to take a 7-0 lead, but the Warriors answered back with Gavin Giordano finding Jake Rizzo in the endzone for a 12 yard TD. AP was able to extend their lead to 14-7 in the second quarter thanks to a 36 yard touchdown pass from Giordano to Nicholas Galuski.  Lasalle tied the game on the ensuing kickoff making it 14 all at the half. The score didn’t move in the second half, resulting in overtime, even after a 45 minute rain delay in the fourth quarter. Lasalle got the ball first in OT, taking it to the end zone but failing to convert the extra point. The Warriors got the ball back and scored via another Giordano-Galuski endzone connection. Senior Luke Hempel converted the extra point to edge out Lasalle by one point in the thriller. The football team hopes to carry this momentum into their next game against Albany on 10/22.

The golf team placed second in the Class B tournament with a score of 275 on 10/12. David Moordadian led the boys shooting 88 which advanced him to the Section 2 ABCD playoffs. On 10/16, Mooradian shot 85 to place 13th in the playoffs. This score allowed Mooradian to play in the Section 2 state qualifier.

The girls tennis team fell 4-3 to Holy Names in sectionals on 10/12. Avery Kittleson and Dani Lapier picked up singles wins while Libby Bulmer & Lilly Vrsalovic won on the doubles end.

The girls soccer team defeated Schenectady 2-0 on 10/12. Gianna Pietrafesa and Emily Bauer scored their first varsity goals to lead AP to victory. The girls ended their senior night game on 10/14 with a 1-1 draw against Colonie. Bailee Lange scored the Warrior’s lone goal off a header while Michelina Lombardi had 5 saves in goal. The soccer team ended their game against Niskayuna in a scoreless tie on 10/16.

The boys soccer team defeated Schenectady 4-0 on their senior night on 10/12. Mason Buttaci and Kyle Almeida each scored twice while Nate Bourgault had the shutout in goal. On 10/14, the boys lost to Colonie 2-0. They then fell 1-0 to Niskayuna on 10/16. 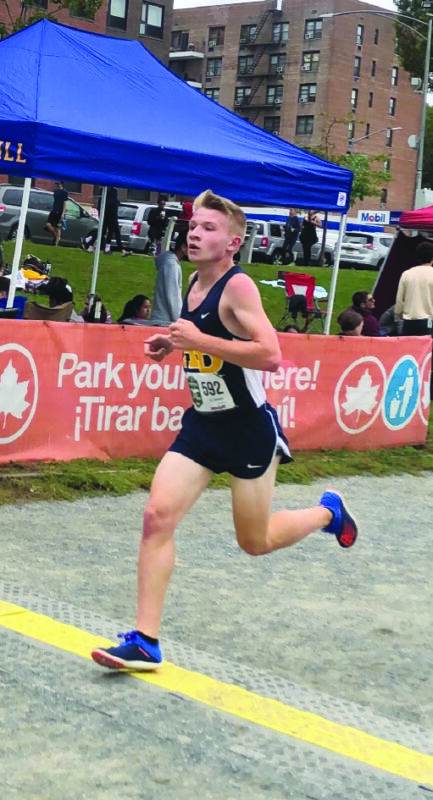 In the spring, Evan does hurdles and the pentathlon for the track and field team. Evan’s father had run cross country his senior year, so when Evan was in seventh grade he decided to sign up for the sport. Evan has continued running and tried to beat his father’s times ever since. Over the summer, Evan worked as a lifeguard and swam a mile each day by the end of the season. Evan also ran uphill to practice for cross country, and goes on distance runs in the little time between cross country and track and field. Evan’s favorite part about cross country is the scenery you pass by as you run. Evan also noted how much he enjoys cheering on teammates. For Evan, the most difficult part about running is the mental aspect to the sport. You have to put in tremendous amounts of effort into practice every day, and be ready for competitions when it is time for your race. Last year, Evan placed sixth in Sectionals for the 110m hurdles, despite being seeded eighth. This year, Evan wants to run a sub 16:30 5k (3.1 miles) in cross country, and hopes to get top 5 hurdles for Averill Park.

While Evan runs for his school, he also manages to maintain academic excellence. Evan has a 97.16 GPA and is in the New Visions STEM course, which includes college-level physics at RPI. Evan noted that part of his success in school comes from being busy with sports. Having less time for homework, Evan finds his mind wandering less and better able to focus on the task at hand. Evan enjoys running and maintains a positive mindset, which helps him excel at his athletics. In his free time, Evan likes playing around with computers, and recently managed to build his own personal desktop. Evan is also an Eagle Scout with 91 merit badges, a member of the strategy and gaming club, a member of the National Honor Society, and is an avid reader of fantasy books. Evan also enjoys playing video games with friends, including more competitive video games such as cs:go or osu!.

Evan drives himself in school by striving to do better than his parents did. Fellow Eagle Scout Michael Beskid also helped set Evan on the path he now follows. Evan would advise a younger athlete to work hard in preseason. “You will mostly get faster from preseason workouts you do, not in season workouts.” Evan also noted that focusing on a working mindset will allow you to do well in any running sport. Next year, Evan hopes to attend RPI, RIT, or WPI and get a degree in chemical engineering with a computer science minor. Evan also hopes to continue running on his school’s cross country and track and field teams throughout college. We wish Evan the best as he finishes his senior year and prepares for college.