This week was filled with sectional action for AP sports.

The girl’s track and field team took 2nd place in sectionals on 5/22. Anna Jankovic won the pentathlon and the 4×100 relay team of Lydia Munandi, Caryn Zimmerman, Sophia Morone, and Lydia Ware won their event with a new school record time of 49.53. The boy’s track and field team also competed on 5/22 and took 3rd place. Michael Beskid won the 400m hurdles and Jamie Cocca won both the shot put and discus events for the Warriors.

The boys’ tennis team fell 4-3 in a close match to Scotia on 5/21 in the sectional finals. Eric Schuman, Tristan Shelhamer, and Ryan Baker/Logan Bielawski all won for AP. On 5/23, AP competed in the Individual Sectional tournament. The doubles team of Ryan Baker and Logan Bielawski reached the third round defeating South Glens Falls and Saratoga before falling to Bethlehem. Eric Schuman advanced to the quarterfinals after winning three matches.

On 5/20, the girl’s lacrosse team defeated Scotia 17-11 to reach the sectional finals. Anita Reitano and Lauren Meyers scored 6 and 4 goals respectively to lead the Warrior offense. On 5/22, AP fell in the finals to Burnt Hills 13-5. Anita Reitano found the nets twice and Julia Foster, Alex VanDerKar, and Lauren Meyers each added a goal in the loss.

The Unified basketball team defeated Columbia 49-14 on 5/20. Nicholas Witzke, Scott Pederson, and Nate White each scored 7 points to lead the Warriors to victory.

This week’s scholar athlete is Kyle Reasor. Kyle plays doubles on the Varsity Tennis team. Kyle has played tennis since his Freshman year, when he became a member of the JV team. He was first introduced to the sport by his brother, who played tennis at Averill Park before him. Kyle’s favorite part of tennis is “spending time with a lot of my friends before and during tennis matches.” Yet, the sport is not always easy; Kyle says the most difficult part of tennis is “not double faulting when the pressure is very high.” In order to prepare for his senior

Kyle works hard both on and off the court. Throughout high school he has maintained a GPA of 96. Additionally, he is a member of the National Honor Society as well as an editor and

writer for the school paper. Kyle’s efforts were recognized at the underclassmen awards last year when he received the 21st Century Leadership Award from Wells College. This year, Kyle is taking difficult courses such as Computer Science Principles, Calculus, AP Bio, Physics, Detective Fiction, Participation in Government, Economics, and Death and Life in Literature. In

his future, Kyle will be attending Seton Hall University and majoring in accounting.

Kyle says that his brother and parents have been great role models in his life, as they “have worked very hard in their lives. This inspires me to live up to what they have done, and

continue to work hard as they have done.” Kyle also says his coach, Coach Gaetoni helps him in his sport; “Coach Gaetani has always pushed my teammates and I to work hard and accomplish all of our goals not only on the court, but off of it. Also, my teammates have been very important to make the sport that much more fun, helping, and without them, tennis would not be the same.”

We all wish Kyle the best as he concludes his senior year and enters Seton Hall. 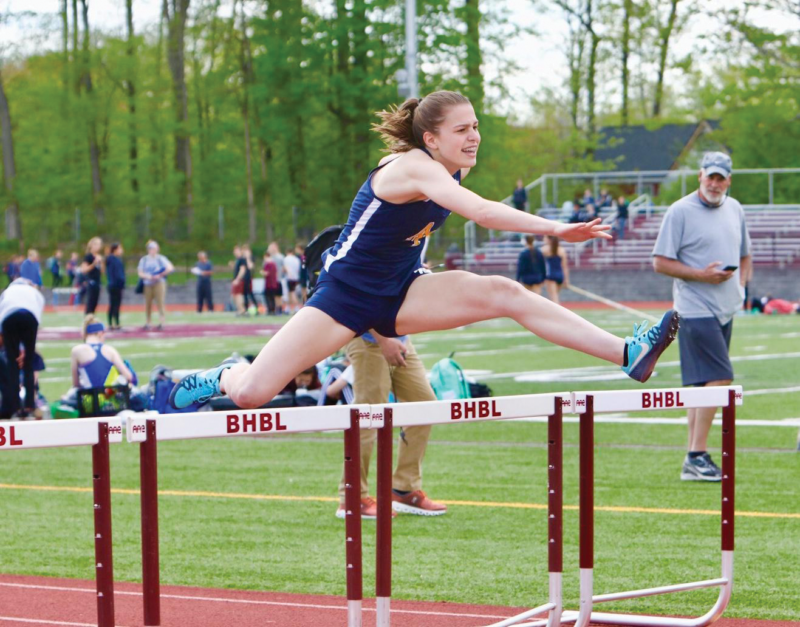