It was an exciting week in sports for Averill Park as regular seasons are finishing up.

On 5/6, the boy’s tennis team beat Albany 6-3 behind wins from Eric Schuman, Max Wilson, Dylan Hansen, and the doubles teams of Ryan Baker/Nico DonVito, Keston Holohan/Zach Ryan, and Nate Jamison/Nixon Kwok. The Warriors have earned the #3 seed for their Sectional tournament.

AP’s unified basketball team defeated Ballston Spa 48-23 in their first game of the season on 5/6.  Nicholas Witzke and Jeremy Gregware scored 10 points apiece to lead AP and Damion Woodward added 8. On 5/9, the Warriors took on Albany and won 48-40 behind 11 points from Logan Bruce and 7 from both Nicholas Witzke and Scott Peterson. Up next for AP is Burnt Hills on 5/16.

Girls lacrosse picked up a 21-10 win against Colonie on 5/6. Julia Foster and Mia Tessitore provided the offensive force for AP scoring 5 goals apiece. On 5/7, the Warriors fell to Columbia 19-6. Janey Adams led AP with 2 goals in the loss. On 5/9, Guilderland defeated AP 13-6. Anita Reitano scored twice for the Warriors in the match.

Boys lacrosse fell to Columbia 20-5 on 5/7. Aiden Jones and Nick Gelder each scored 2 goals in the match. On 5/9, the Warriors fell to Guilderland 13-1. Up next for AP is an away match against Columbia on 5/16.

Make sure to come out and support the AP’s athletes in their upcoming events. Go Warriors!

This week’s scholar athlete is Nico DonVito. Nico plays doubles on the Varsity Tennis team. Nico has played tennis for four years, two years at the JV level and two at Varsity. Nico says his favorite part of tennis is “being able to play and have fun with a lot of my good friends. Also, it’s a lifetime sport so hopefully, I’ll still be playing in my sixties.” Nico’s greatest

accomplishment in his sport came when he and his team won their division last year. This year, Nico has his goals set even higher as he looks to win a sectional title.

In order to prepare for this season, Nico played tennis indoors and he ran outside. Nico is very proud of his team; he says,

“we’re such a small school, but big schools respect us because we have a lot of talent and are able to compete with them.”

Nico works hard both on the courts, and in the classroom. Throughout high school, Nico has maintained a GPA of 97.2. This year, he is taking numerous challenging courses such as AP Biology, Statistics, The Human Brain, Engineering Design & Development, Men’s Literature, and Economics. Nico’s hard work was recognized last Fall when he was inducted into the

Next year, Nico will be attending Binghamton University to study Biology. He plans to continue on the pre-med track in order to become a physician’s assistant.

Nico says his greatest role models are his parents as they “inspire me every day. They are both so passionate about their jobs, and that makes me want to get good grades in order to be able to work my dream job.” Nico also says his coach, Coach Gaetoni, helps him to succeed in his sport; “Coach Gaetani helps me excel in tennis. He’s able to analyze my mistakes and show me how to become better at the game.” We wish Nico the best as he ends his final season at Averill Park and prepares to attend Binghamton University next year. 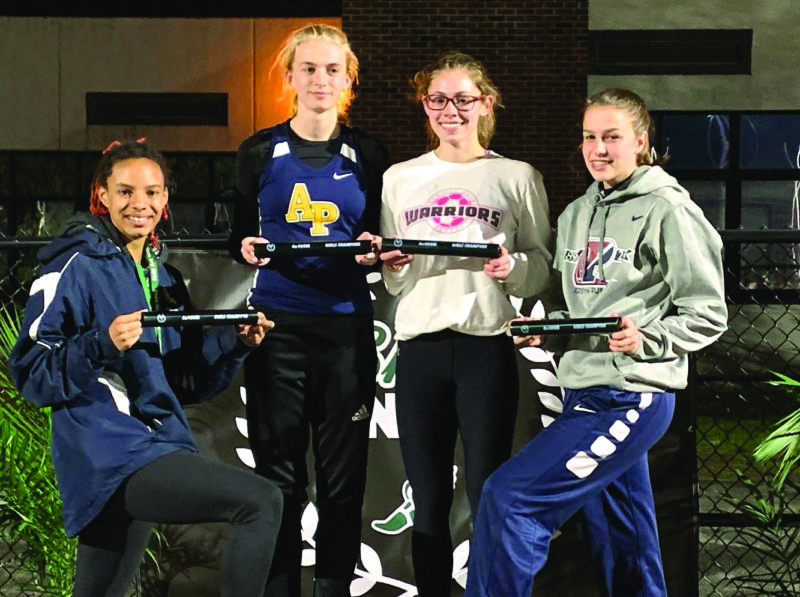 From the Shenendehowa Invitational, May 10, we have the winning Girls 4x400m relay team from APHS! (L-R) Lydia Munandi, Lydia Ware, Sophia Morone and Anna Jankovic.

These Lady Warriors bested a field of 12 schools with a blistering time of 4:05. Congratulations ladies!