It was an exciting week for Warriors sports fans! AP’s softball team defeated Burnt Hills 3-0 on 4/29. Maise Dawson homered for AP and McKenzie Swinson and Kelsey Mohl each drove in a run in the victory. AP followed this win with a 6-2 win against Ballston Spa on 4/30. Kelsey Mohl and Marissa Nagel each recorded 2 RBI’s and Jadyn Lee got the win in a complete game performance. The Warriors ousted Troy 3-1 on 5/1 behind another complete game performance from Jadyn Lee and a 3 hit day for McKenzie Swinson.

Boys lacrosse defeated Maple Hill/Ichabod Crane 16-2 on 4/29. Aidan Jones and Nick Gelder each recorded 3 goals for AP. Matt Kenneally, Adam Kiely, and Chris Kalinowski also added 2 goals in the win. On 5/2, AP fell to Ballston Spa 19-2. They will next take on Guilderland at home on 5/9.

Girls lacrosse destroyed Emma Willard 16-1 on 4/29. Anita Reitano and Lauren Meyers led the Warriors with 4 and 3 goals, respectively. On 4/30, the Warriors fell to Columbia in a close 12-11 contest. Lauren Meyers scored 5 times to lead AP’s offense and both Julia Foster and Janey Adams added 2 goals in the defeat. The Warriors fell to Ballston Spa 9-6 on 5/1. Julia Foster found the nets twice and Skye Taylor recorded 12 saves for AP in the loss.

The girls track and field team also faced off against Burnt Hills and Schenectady on 5/1 and defeated each of them.

This week’s scholar athlete is Julia Haworth. Julia is a defender on the varsity lacrosse team. Julia has played lacrosse for seven years after she began playing the sport in sixth grade.

Julia says her favorite aspect of lacrosse is the friendships she has formed through the sport; “the connections I’ve made throughout the years will hold a special place in my heart forever.” To prepare for this season, Julia attended preseason conditioning as well as play for a travel team through Capitaland Lacrosse. Julia’s offseason efforts have helped her team greatly as they beat Shaker for the first time in school history. Julia hopes her and her team’s hard work will help

them win a sectional title this year. “It is more possible than it ever has been because of the amazing effort this team has put in this year.”

Not only does Julia work hard on the field, but in the classroom as well. Julia has maintained an average of 93 throughout high school. Julia’s hard work in her academics was recognized last Fall when she was inducted into the National Honor Society. Julia participates in Student Government and does community service through the AP Youth Girls Lacrosse program by refereeing, coaching, and running practice clinics for younger players. Additionally,

Julia is a candidate for The Leukemia and Lymphoma Society Student of the Year. In the future, Julia will follow in her mother’s footsteps as she will be attending SUNY Oneonta to study Early Childhood Education.

Julia’s greatest role model has been her sister Emily. “She has shown me the type of person I can be and inspires me to be better just like her. Emily always brings out the best side in

me, and I know I can always rely on her to keep my head up. With her being a high honor student, and an EMT in her free time, she inspires me to work hard and give back.”

Julia would like to thank her teammates for making her last season unforgettable: “Thank you for laughing with me

until it hurts, letting me have a shoulder to cry on, and most importantly always having my back.”

We all wish Julia the best as she finishes her high school season and enters college. 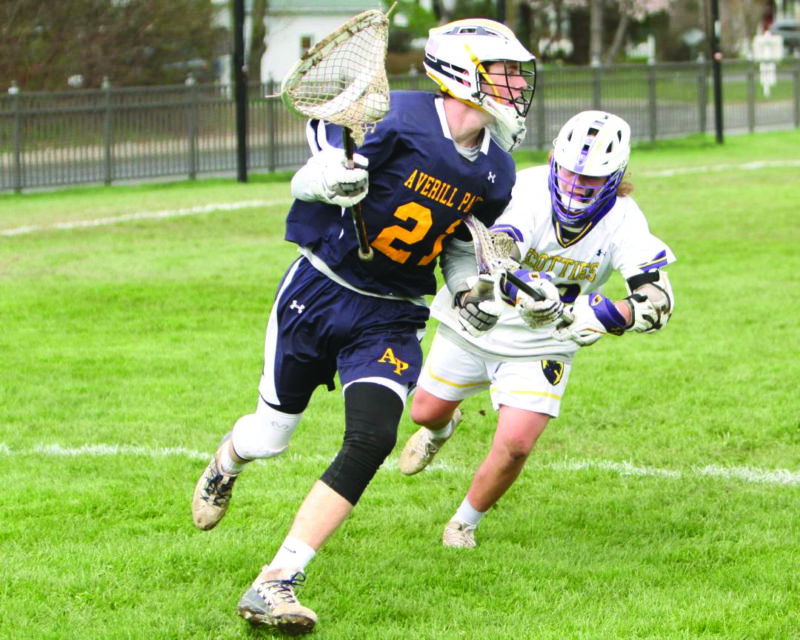