It was an exciting week in sports for Averill Park!

The girl’s lacrosse team had an exhilarating week, competing in four matches. The Warriors defeated Colonie 15-4 on 4/1. Lauren Meyers and Alex VanDerKar led the team with 4 and 3 goals respectively for the Warriors. On 4/2, AP fell to Bethlehem 17-4. Janey Adams found the nets twice for AP and Skye Taylor recorded 12 saves in goal. On 4/4, the Warriors ousted Shaker in a 10-7 battle. Julia Foster led the way with 3 goals for AP and Anita Reitano and Mia Tessitore each recorded 2. AP rounded out the week falling to Shen 13-4 on 4/6. Julia Foster, Lauren Meyers, Anita Reitano, and Julia Gelder scored the goals for AP. Up next for the Warriors is a home match versus Saratoga on 4/16.

Girls softball defeated Bethlehem on 4/4 by a score of 8-2. Jadyn Lee got the win for AP with the help of 11 hits from the Warriors offense. AP’s next league match is home against Colonie on 4/15.

The Warriors baseball team fell to Bethlehem 8-3 in their regular season opener on 4/3. They will next take on CBA away from home on 4/12.

On 4/4, the boy’s tennis team fell to Bethlehem 8-1. The doubles team of Ryan Baker and Logan Bielawski secured the lone win in a tiebreak for AP. The Warriors will face off against CBA next in a home match on 4/12.

Make sure to come out and support AP’s athletes in their upcoming games. Go Warriors!

This week’s scholar athlete is Marissa Nagel. Marissa is a captain on the Varsity Softball team. This season marks Marissa’s second year playing at the varsity level. However, she has played the sport since she was 7 years old through the Classie Lassies program. Marissa’s favorite part about softball is “being able to have fun with my teammates and be successful as a team.” Yet, one of the most difficult aspects of the sport is that “you don’t always succeed in softball and one of the hardest things is putting the last play behind you.” Last year, Marissa and her team were able to achieve great success as they reached the New York State Final Four game after winning the sectional title. This year, Marissa hopes to mirror their success from last year, and win another sectional title. In order to prepare for this season, Marissa played softball for the

Capital District Fusion, as well as practice her hitting and fielding 2-3 times a week.

Marissa’s hard work is not only evident in her sport, but in her academics as well. Throughout high school Marissa has maintained a GPA of 95. This year, Marissa is taking

multiple challenging courses such as Advanced Placement Biology, Statistics, and Economics. Last Fall, Marissa’s hard work was recognized when she was inducted into the National Honor Society. In her future, Marissa will be attending SUNY Oneonta where she will be playing on the softball team.

Marissa does not only attribute her successes to her own hard work, but to the efforts of others as well. Marissa says her biggest role model is her mother, “my mom has inspired me to

We all wish Marissa the best as she concludes her senior year and enters SUNY Oneonta this August. 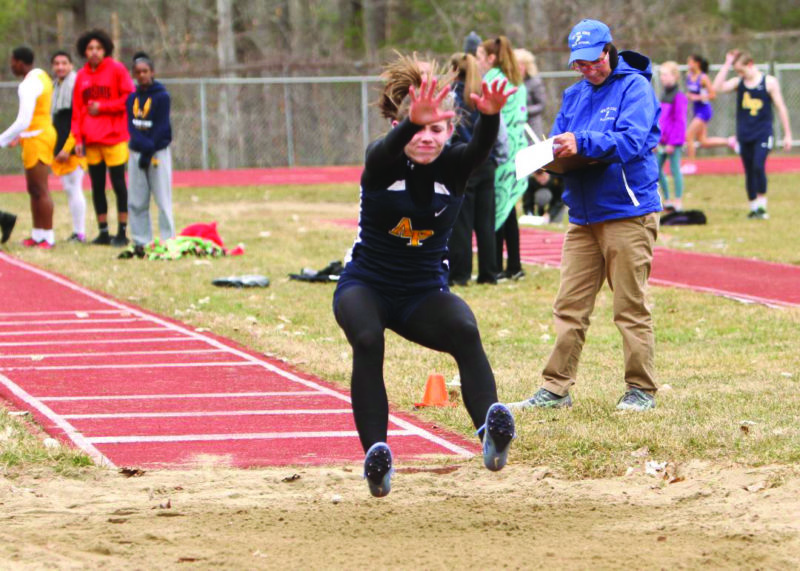 AP Senior Sophia Morone in flight about to land a 16’8” long jump. This effort happens to be Sophia’s personal record. Averill Park Boys and Girls track teams travelled to Ballston Spa and came away with the overall win over Troy HS and Ballston Spa HS.