It was a good week to be rooting for the AP girls’ basketball team. The Warriors took on Holy Names in the Class A semi-finals on 2/27 and came out with a 46-31 win. Anna Jankovic led the team with 13 points. On 3/2, AP defeated Queensbury 50-41 to capture the Section 2 Class A Championship for the sixth year in a row. Kelsey Wood scored a team high 14 points and was named the Class A Tournament MVP. Anna Jankovic was also named to the all-tournament team.

Lydia Ware, Jamie Cocca and Zach Hotaling all competed at the State Championships for indoor track on 3/2. Ware finished 3rd overall in the intersectional relay and Hotaling finished 27th in the pole vault. Jamie Cocca placed 3rd in the state and 4th in the federation in the weight throw.

I will be back next week with more Warrior Updates!

This week’s scholar athlete is Brian Bourne. Brian is currently on the Varsity Tennis team and he played on the Varsity Soccer team last fall. This is Brian’s second year on the

Varsity Tennis team after being the number one singles player for the JV Tennis Team during his Sophomore year. Brian’s favorite part about the sport is that he is “able to learn and be

successful in a lifelong sport, while being able to enjoy it all with my friends.” Although tennis is enjoyable to Brian and his team, there remains a competitive aspect to the sport; it is

challenging to “outlast your opponent, because as soon as they get tired, your chances of winning greatly increase.” Not only does Brian play tennis, he played on the Varsity Soccer

Team as well. Last season marked Brian’s second year playing soccer at the Varsity level. Brian played almost every position possible – defense, midfield, and on the wing. Through his efforts on the field at each position he played, Brian was Awarded the Coaches Award.

Brian does not only demonstrate hard work in his sports, but in the classroom as well. Throughout high school, Brian has maintained a GPA of 96. This achievement becomes even

more impressive with the challenging courses Brian has taken. This year alone, Brian is taking two Advanced Placement classes, AP Calculus and AP Government and Politics. Additionally, Brian is taking a series engineering classes in order to finish Project Lead the Way, such as Computer Science Programming and Engineering Design and Development. Brian’s academic achievements were recognized last year when he was awarded the Rochester Institute of

Technology (RIT) Computing Medal Scholarship. Last Fall, Brian was inducted into the National Honor Society for his academic excellence. In his future, Brian plans to attend a

university and pursue a degree in computer science and business.

Brian does not only attribute his successes to his own efforts, but to the efforts of others as well. He says his coaches and his family help him to succeed in his sports. Brian’s role model

is his grandfather, “my grandfather taught me to give it my all in everything I do.” Brian would also like to give a “shout out to the tennis boys,” for their help both in and outside of his sport.

We wish Brian the best as he finishes his Senior year at Averill Park and readies himself to enter college. 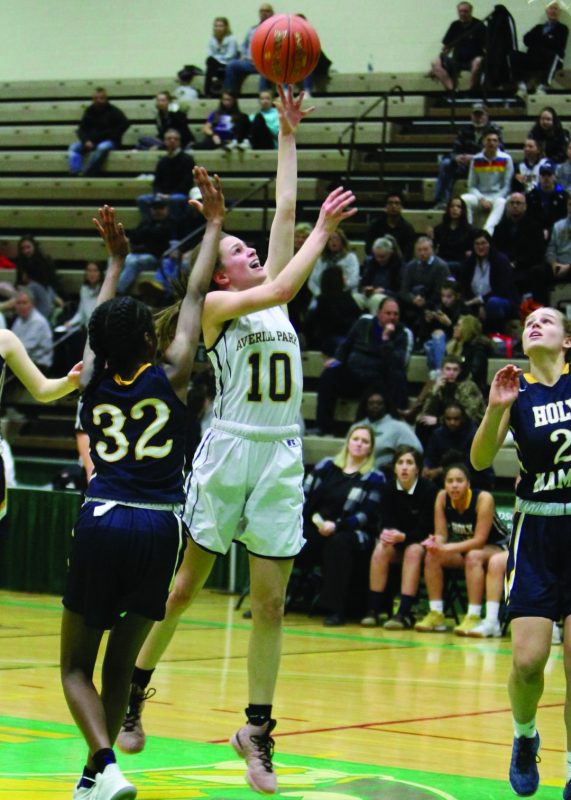 AP Junior and game leading scorer Anna Jankovic goes to the hoop for 2 of her 12 points. AP faced off against Holy Names 2/27/19 at HVCC and came away with the Section 2 Class A semifinal win.