Hello Warrior fans! The winter sports season continues as we near the end of the month.

The girls basketball team crushed Columbia on 1/18, with a 65-21 final score. Amelia Wood led the girls with 25 points while Taylor Holohan and Michelina Lombardi added 20 and 11 points respectively. The basketball team will travel to Guilderland for their next game on 1/28.

The boys basketball team fell 47-38 against Columbia on 1/18. The boys had a hardfought loss to an undefeated CBA team on 1/21, with a 49-41 final score. Senior Dan Coiteux led the boys with 17 points while Senior Nick Carbone added 13. The basketball team will face Guilderland on 1/28 for their next game.

The hockey team defeated Queensbury 5-2 on 1/19. Kyle Millington scored twice and Cole Davidson added another goal in the win. Millington, Davidson, and Jack Culliton also assisted on goals. The hockey team fell 2-1 against the Storm on 1/21. They will take on Saratoga in their next game on 1/28.

The bowling team defeated Schenectady 30-2 on 1/18. Mike Angrisano led the boys with a 653 high triple. The bowling team went on to end Colonies undefeated season on 1/20, beating them 16.5-15.5. Hunter Willett had a 657 high triple and Jake Kellar had a 622 high triple in the winning effort. 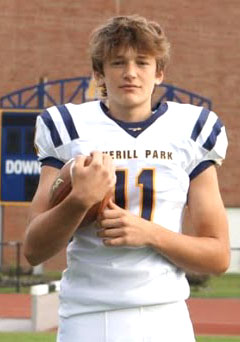 AVERILL PARK – This week’s Scholar Athlete is Jack Adams. Jack is a wide receiver on the Varsity  football team, and plays lacrosse in the spring. Jack has known he wanted to play football since  he was very young, and he has always enjoyed throwing a football around with his dad. Jack’s  football career began in second grade, and this is now his eleventh season playing the sport. To  prepare for his sport, Jack lifts in the off-season and trains throughout the spring and summer.  Jack also plays seven versus seven in the winter to keep himself ready for the fall. Jack’s  favorite part about football “has to be the team and just the friends that I have made through it.”  Jack also said that his favorite moment from football is when he made his first Varsity  touchdown in a game against Queensbury. Jack commented that the feeling you get from that  first Varsity score is simply unparalleled. In Jack’s junior year he suddenly had his position  switched. He decided to make the best out of his situation, but Jack quickly realized this was  beneficial for him and the team.

In addition to his athletic success, Jack excels academically. Jack has an average of  92.5%, and is currently taking Advanced Placement Statistics. To balance school and sports,  Jack uses any free time he has during the school day to get work done. This ensures that he  won’t have to worry about it after practice, and allows him to better focus on the game. Jack  also has a gap between the end of the school day and the start of practice, which he uses to get  help if he needs it. Jack is also a member of the National Honor Society.

Jack’s teammates inspire him to work hard in his sport. Jack noted that everyone has  an important part to play on the team, and this helps push Jack to fill his role and support the  rest of his teammates. Jack said that the coaching staff truly helped him excel at his sport.  Every day they sacrifice their own time to help push their players to improve, and Jack is  grateful for all of the guidance they have offered. Jack would advise younger athletes that,

“Unlike every other sport, with football you only play 8 games a year, make the best of  everyone. Put in as much work as you can all year round to be the best you can for those  games.” Next year, Jack plans on going to college and studying either engineering or biology.  We wish Jack the best as he finishes his senior year and prepares for college.